No, this video does not show an Indian millionaire celebrating Narenda Modi's re-election by giving away $100,000

A video has been viewed thousands of times in multiple posts on Facebook which claim it shows an Indian millionaire celebrating Narendra Modi's re-election by giving away US$100,000 to people in a New York street. The claim is false: the video shows a stunt staged by a US musician in New York; the footage was posted online before voting in the Indian elections had concluded. 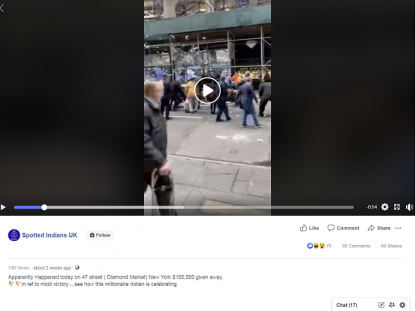 The caption states: “Apparently Happened today on 47 street ( Diamond Market) New York $100,000 given away. ??in ref to modi victory .. see how this millionaire Indian is celebrating.”

The post refers to Indian prime minister Narendra Modi's re-election on May 23, 2019.

The same video was posted here, here, here and here on Facebook with a similar claim that an Indian millionaire gave money away to celebrate Modi’s victory.

The claim is false: the video shows a stunt in New York which was staged before voting in the Indian elections had concluded.

A keyword search found the same video published on YouTube here on May 15, 2019.

Below is a screenshot comparison of the YouTube video of May 15, 2019 (L) and the video in the misleading post (R), with a man throwing money in the air circled in red: 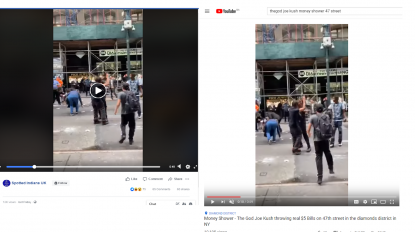 He posted similar footage of the same stunt here on his Instagram page on May 16, 2019.

The stunt was staged here outside a row of jewellery shops on 47th street, New York.