An article claims that a proposed law in Ontario will "officially criminalize Christianity" in the Canadian province. Bill 84, which aims to prohibit hate-promoting demonstrations on the grounds of the Ontario legislature in Toronto, does not make any mention of Christians or Christianity. The Ontario MP who proposed it told AFP that Christians are not targeted by the bill.

“Canada Moves to Ban Christians From Demonstrating in Public Under New Anti-Hate Proposal,” according to a headline on Big League Politics, an online website founded by former employees of ultraconservative US website Breitbart News. The article adds in a subhead that “The Canadian province of Ontario is considering legislation that would officially criminalize Christianity.” 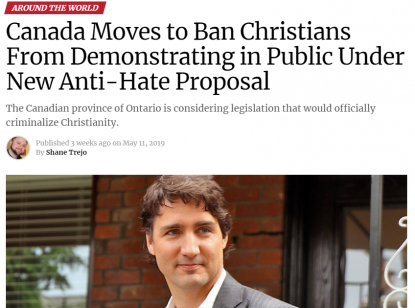 Screenshot of the online article on June 4, 2019

The article, which was shared more than 16,000 times on Facebook and on Twitter, refers to Bill 84, a proposed law in Ontario’s provincial legislature otherwise known as “Prohibiting Hate-Promoting Demonstrations at Queen’s Park Act, 2019.”

Although the article features a photo of Canadian Prime Minister Justin Trudeau, the Liberal head of the federal government is not connected to the bill. The bill is not federal, but provincial and was moved by Progressive Conservative Party of Ontario member of parliament Roman Baber.

The bill, which passed two readings and is currently referred to the Standing Committee on Justice Policy, aims to prohibit “any demonstration, rally or other activity that, in the opinion of the Speaker, is likely to promote hatred against any identifiable group from being permitted on legislative precinct grounds.”

The “legislative precinct grounds,” refers to the Ontario Legislative Building’s site, on Queen’s Park in downtown Toronto. If passed, Bill 84 would amend the Legislative Assembly Act, the set of rules for the Ontario legislature, to include a ban on demonstrations deemed to promote hate against a particular group.

Baber, a member of Ontario Premier Doug Ford’s ruling party, told AFP that “it’s inconceivable, given the way that the bill is drafted, that it could be used to suppress the free speech of Christian Ontarians or of any other religions.”

The Big League Politics article quotes at length from an opinion piece published on Life Site, presenting opinion as fact.

The Life Site article raised concerns over the definition of “hate,” but Baber said that the intent of the bill is to refer to section 319 of the Canadian Criminal Code.

A search for the words “Christian” and “Christianity” in the bill’s text shows no results, nor are any other specific religious, social or political groups mentioned.

If the bill passes the justice committee, it will have to go through a third reading in the Ontario Legislature.