Skip to main content
A woman in protective gear shops at a supermarket, amid concerns over the spread of the COVID-19 novel coronavirus, in Bangkok on March 21, 2020. (AFP / Lillian Suwanrumpha)

A photo has been shared hundreds of times in multiple Facebook, Twitter and online forum posts alongside a claim it shows a Rohingya woman killed during anti-coup protests in Myanmar in 2021. The claim is false: the photo has circulated since at least 2017 in online posts unrelated to the recent coup in Myanmar.

The post's Thai-language caption translates to English in part: “They separate mother and child by merciless killing. RIP mother, poor baby boy. Warfare in Myanmar, RIP to all those who lost their lives.” 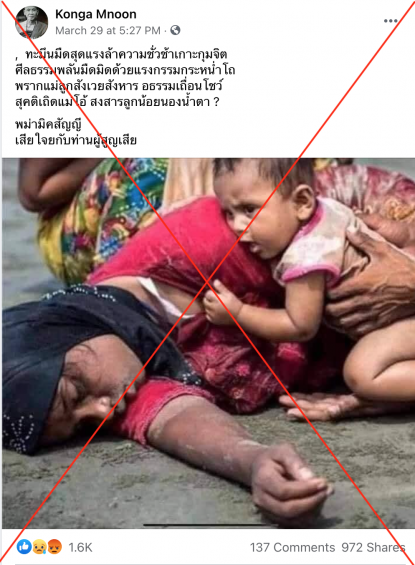 A screenshot of the misleading post, taken on April 5, 2021

The misleading post circulated online during ongoing protests in Myanmar against February's military coup. AFP reported on the developments here.

As of April 2, 2021, the Myanmar junta's suppression of the protests has left 543 civilians dead, according to the Assistance Association for Political Prisoners (AAPP).

Comments on the posts indicate some Facebook users were misled by the photo.

An identical photo was also shared alongside a similar claim here on Facebook; here, here and here on Twitter; and in this online forum.

The claim is false: the photo predates the anti-coup protests in Myanmar by several years.

A keyword search on Facebook found the photo was posted here on October 22, 2017 by a page called Rohingya Community.

The 2017 photo is captioned: “A #Rohingya Muslim woman fainted after exhausting journey of 13 days from Arakan to Bangladesh as her infant baby reaches her mom to feed.”

Hundreds of thousands of Rohingya fled to refugee camps in Bangladesh after the Myanmar military drove them out of Myanmar’s northern Rakhine state in 2017, AFP reported. The United Nations has described the Myanmar regime's persecution of the Rohingya as ethnic cleansing.

Below is a screenshot comparison of the photo in the misleading posts (L) and the photo published by Rohingya Community in 2017 (R):

The same photo was also shared by a journalist on Twitter on October 22, 2017 alongside a similar caption.

It was also published in this Polish-language news report on July 2, 2018 about the Myanmar military's persecution of the Rohingya in 2017.