The men in this viral video are not Volvo bosses, the company said

A video has been viewed hundreds of thousands of times on social media alongside a claim that it shows Volvo’s chief executive being run over by a self-braking car. The claim is misleading; while the video shows a genuine incident in 2015, during which a car smashed into staff at a car dealership in the Dominican Republic, the man hit was not the CEO of Volvo. The automaker told AFP that the car was not equipped with a pedestrian detection system.

The video shows people gathered watching a car initially reversing. Suddenly, the car speeds up and lunges forward, driving into a man in a pink shirt. 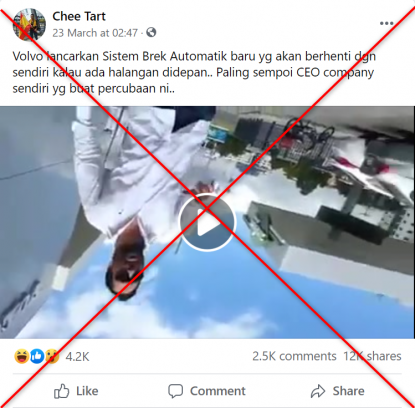 “Volvo launched a new Automatic Brake System that will stop on its own if there are obstacles ahead.. The coolest CEO of the company himself made this attempt,” the Malaysian-language caption reads.

The video has been widely shared on social media, with some posts, like this one, claiming it shows Volvo’s managing director being struck by the apparently out-of-control car, and that he was left paralysed.

Contacted by AFP, Volvo Malaysia said on April 1, 2021, that the video showed a genuine incident involving a car which did not have a safety feature to detect pedestrians.

While the identity of the men hit by the car are unknown, Volvo said they were not company bosses.

“Contrary to the title of the video, both men were alright and none of them were paralyzed nor were they a Managing Director of Volvo Cars,” the firm said in a statement.

“We would like to reiterate that in the depicted incident the XC60 was equipped with City Safety, however, it did not have the Pedestrian Detection functionality – this is sold as a separate package and would have been needed to mitigate or avoid the car colliding with the two men.

“Even if the car was equipped with this feature, the heavy acceleration of the driver could have caused the system to be overridden and deactivated; our auto-braking (mitigation and avoidance) technology is highly advanced and in cases which the car detects that the driver intends to perform the action deliberately, it will deactivate itself.

Volvo said its City Safety feature is active in speeds up to 50 km/h.

“This is how not to train your car dealership staff about a safety system meant to protect pedestrians,” the reporter says. “It’s OK, no-one was badly hurt. No-one even went to the hospital.

“The bad news is that the car wasn’t actually equipped with a pedestrian detection system.”

The CNN video credited the clip to Dominican Republic news website Remolacha. A further keyword search on Google found that the video was initially uploaded on Remolacha’s YouTube channel on May 19, 2015, but the video is no longer available on the channel.

Below is a screenshot comparison of the video in the misleading post (L) and the CNN video (R): 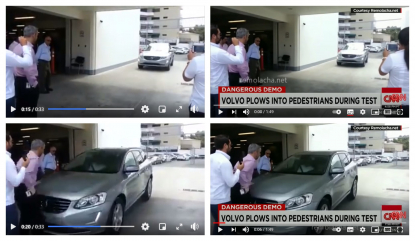 AFP also found the location of the Volvo dealership here, in Santo Domingo, the capital of the Dominican Republic.

Below is a screenshot comparison of the video in the misleading post (L) and a Google photo of the Volvo dealership (R), with the same features of the building circled in red by AFP: