This photo shows a 2020 anti-France rally in Bangladesh

A photo of a protest has been shared repeatedly in multiple Facebook and Twitter posts alongside a caption about Bangladeshi Muslims protesting against Indian Prime Minister Narendra Modi’s visit to Dhaka in March 2021. The photo, however, has been shared in a misleading context: it shows an anti-France rally in Dhaka in 2020. The protest was sparked after President Emmanuel Macron defended cartoons depicting the Prophet Mohammed. 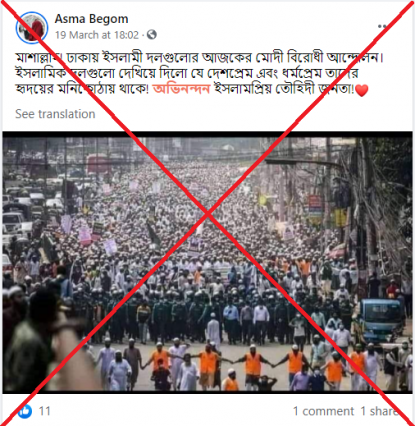 The post’s Bangla-language caption translates to English as: “Wow! Islamic parties held protests against Modi in Dhaka today. Islamic parties have shown that patriotism and religiosity are in their hearts. Congratulations to the unity of Islamic people.”

A reverse image search on Google found the same photo was published here in an AFP report on October 28, 2020. 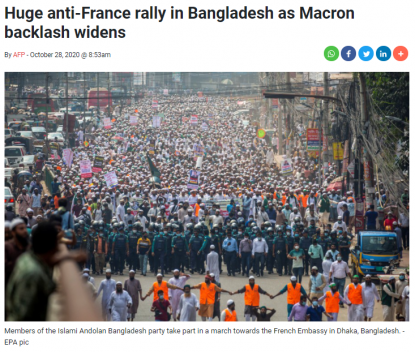 “Members of the Islami Andolan Bangladesh party take part in a march towards the French Embassy in Dhaka, Bangladesh”, reads the caption of the photo credited to EPA -- the European Pressphoto Agency.

A further search found the photo was also published here on EPA's website alongside a similar description on October 27, 2020.