An image has been shared repeatedly by Sri Lankan Facebook users that shows opposition party members protesting against deforestation. The photo purports to show some protesters holding a banner that contains profanity. The banner, however, has been digitally altered to include an expletive.

It purports to show a group of Sri Lankan opposition party protesters holding a banner that calls for an end to deforestation.

The Sinhala text at the bottom of the post graphic reads:  “Looks like  environmental destruction will be put to a complete stop this time, look at how angry they are”. 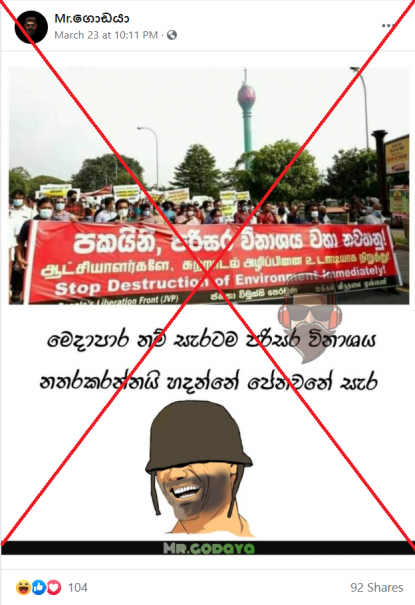 The same image was shared alongside a similar claim in multiple Facebook posts here and here; and on Instagram here.

The image, however, has been digitally altered to include an expletive.

The original Sinhala-language word paalakayini, which translates as "rulers", has been digitally altered to show "pakayini", an expletive in Sinhala.

A reverse image search on Google of the photo found the undoctored image was originally shared in this Facebook post on March 22, 2021.

The banner reads: "Rulers, stop destruction of environment immediately" in Sinhala. A similar message can be seen displayed in Tamil and English text underneath.

The protest, organised by the JVP, urged the government to stop environmental destruction in Sri Lanka.