A video has been watched hundreds of thousands of times on YouTube alongside a claim that it shows an Indonesian court officer who became “seriously ill” after abusing and dragging a Muslim cleric to a court room. The claim is false: the video shows an Indonesian elections official being treated in hospital due to work exhaustion during the 2019 elections; a photo in the video showing the cleric’s “bruises” has been doctored. 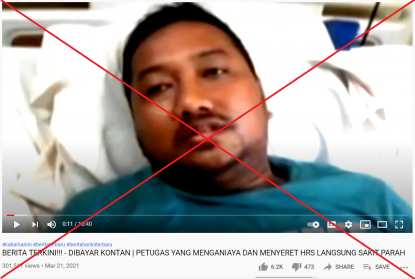 Screenshot of the misleading video, taken on March 24, 2021

Habib is an honorific given to a person who is believed to be the descendant of the Prophet Muhammad.

The video shows a scene of Rizieq being brought to a courtroom (image 1); when the scene freezes, a small picture of a man in a blue top pops out, with a red arrow pointing to the man who brings Rizieq to the room (image 2). The next scene shows a clip of the man in the blue top talking as he is resting on a hospital bed (image 3).

At the 0:30 mark, a voiceover speaks in Indonesian: “The officer who draggedHabib Rizieq to the courtroom and twists his arm, which became bruised, immediately fell sick after he left the courtroom.”

At the 2:42 mark, the video shows a photo of Rizieq raising his right arm, with a bruised wrist circled in red (image 4).

Below are screenshots of the scenes in the video: 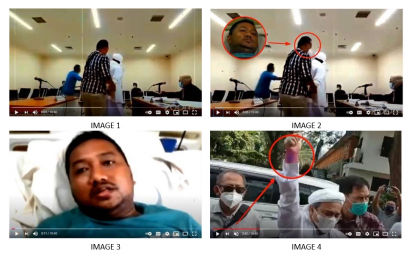 Screenshots of the scenes in the video

The same video was posted alongside a similar claim here and here on YouTube.

A screenshot of the video was posted here and here on Facebook.

The man lying down on a hospital bed can be seen at the 1:47 mark of the iNews video.

According to the video report, the man was Soegeng Afriadi, an election official in the Indonesian city of Medan, who was treated in hospital because of exhaustion from working during the 2019 elections.

Nearly 900 election officials had died and more than 5,000 others had fallen sick after Indonesia held its legislative elections and presidential election on April 17, 2019, the General Elections Committee said, as reported by local news sites Kompas.com and Kumparan in January 2020.

Below is a screenshot comparison between the scene seen in the misleading video (L) and in the original iNews video (R):

The photo showing Rizieq’s "bruised arm" has been doctored from a photo published in this December 12, 2020, report from Okezone.com, headlined: “Habib Rizieq Gives a Thumbs Up, Looks Spirited as He Is Questioned by Jakarta Police.”

The original photo, captioned “Habib Rizieq Shihab arrives at Jakarta police headquarters,” does not show his wrist has any bruises.

Below is a screenshot comparison between the scene seen in the misleading video (L) and in the original Okezone.com photo (R):

Screenshot comparison between the scene seen in the misleading video (L) and in the original Okezone.com photo (R)

The scene showing Rizieq being brought to a courtroom is taken from a video of the cleric’s trial session on March 19, 2021, broadcast by Kompas TV here – three months after the event captured in the Okezone photo.

Below is a screenshot comparison between the scene seen in the misleading video (L) and in the original Kompas TV video (R):

The misleading video also shows scenes of stacks of banknotes, which are taken from this video, posted on YouTube on November 14, 2019, and is titled: “Is this the MONEY you’ve been questioning about?”

The video is not related to Rizieq Shihab nor the election official.