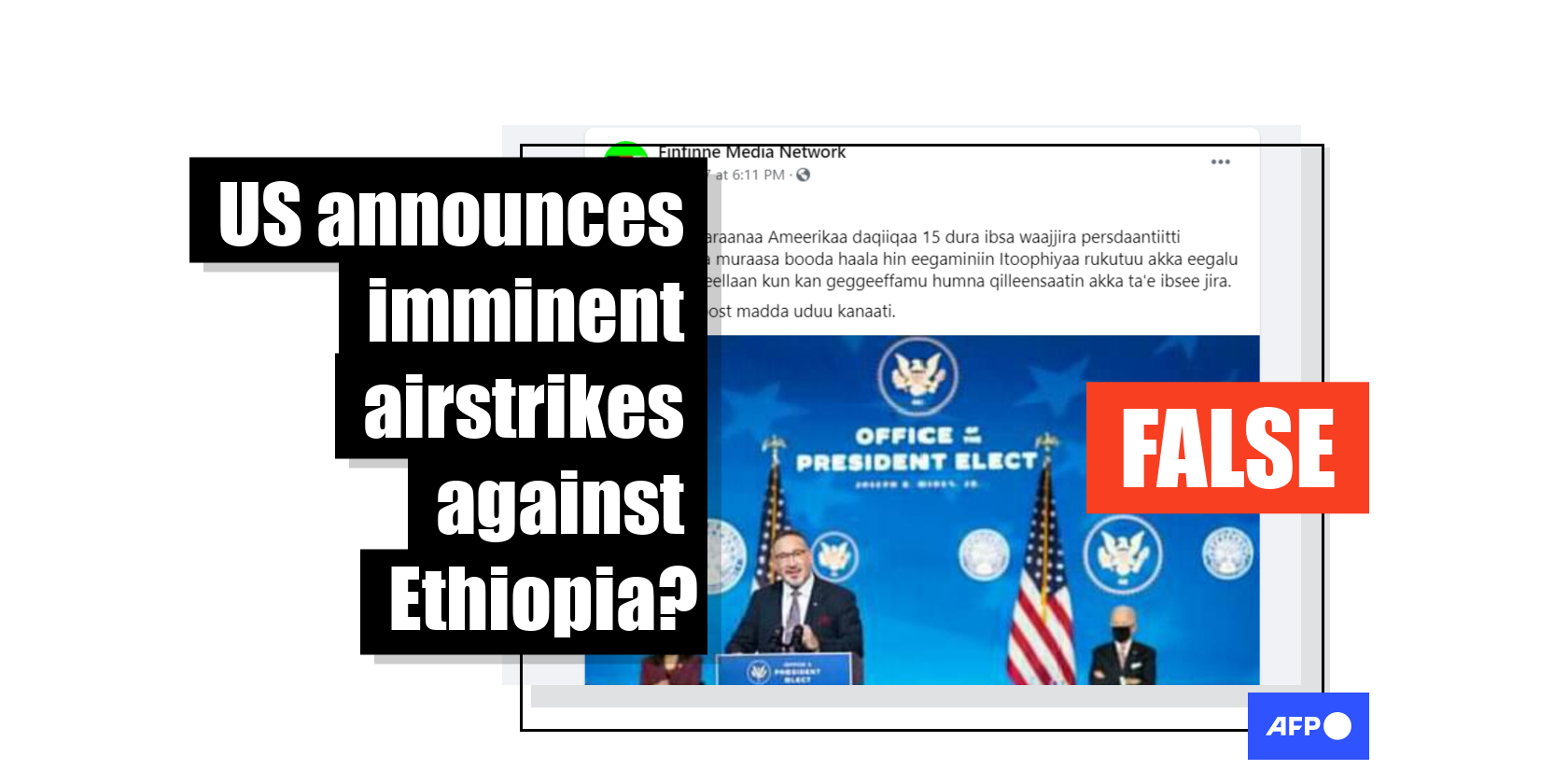 A Facebook post alleging that the US Department of Defense had announced an imminent airstrike on Ethiopia has been shared hundreds of times in the East African country since early March 2021. The post cites The Washington Post, an American newspaper, as its source and also claims that the strike order came from the Oval Office. This is false; the US Department of Defense has made no such announcement. Furthermore, The Washington Post denied being the source of these claims.

“The US ministry of defense announced in a statement released by the President’s office that it will carry out an airstrike in Ethiopia (sic),” an excerpt of the Facebook post's caption reads in Oromo. It has racked up more than 700 shares since March 7, 2021.

The page that published the post, called “Finfinne Media Network”, has more than 21,000 followers. According to page transparency information provided by Facebook, it was created in November 2020.

The account has a history of promoting pro-Oromo content. The Oromos are Ethiopia’s largest ethnic group, and tensions with the federal government have been high since the arrest of their political leader, Jawar Mohammed, who has been in prison since July 2020. 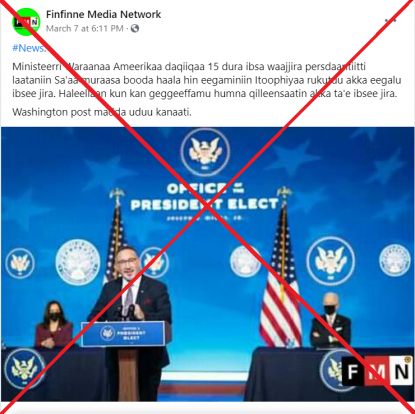 The post further claims that the US president’s office issued a statement announcing the airstrike against Ethiopia and that the military operation will be led by the US air force. It also claims that this information came from The Washington Post.

US Department of Defense refutes claims

A search on the website of the US Department of Defense did not yield any results concerning a pending airstrike in Ethiopia.

Contacted by email, a US Department of Defense spokesman refuted the claim that they had issued a statement regarding an airstrike on Ethiopia.

“There has been no such U.S. Department of Defense announcement”, he told AFP Fact Check on March 24, 2021.

Contacted by AFP Fact Check, The Washington Post denied being the source of the allegations.

“The Washington Post did not publish any such claim,” Azhar AlFadl Miranda, a senior publicist at the news organization, told AFP.

Furthermore, a search on The Washington Post’s website with the keywords "Ethiopia" and "airstrike" revealed 65 results, but none of these articles discussed a US military operation in Ethiopia.

The image featured in the false post is several months old and not related to airstrikes in Ethiopia.

The screen in the background of the image offers a clue that it is old. The text says “Office of the President Elect”, implying that the event predates Biden’s inauguration as the 46th president of the United States on January 20, 2021.

By running a reverse image search using TinEye, AFP Fact Check found the original footage from which the image was taken. It was filmed when US President Joe Biden introduced Dr. Miguel Cardona as his nominee for education secretary on December 23, 2020. In this YouTube video, Cardona is seen making a speech with Biden and Vice President Kamala Harris sitting behind him.

Every student must be equipped to thrive in the economy of the future. Every educator needs resources to do their jobs with dignity and success. And every school needs support to reopen safely.

We can achieve this with Dr. Miguel Cardona leading our Department of Education. pic.twitter.com/vfYQhnPEEA

Cardona was sworn in as the 12th education secretary on March 2, 2021.