This video shows a former Indonesian fisheries minister speaking to fishermen in 2018, not to workers in 2020

A video that shows a former Indonesian fisheries minister giving a speech to a crowd has been viewed almost 1.5 million times in multiple YouTube and Facebook posts that claim she was addressing a protest by students and workers in October 2020. The posts circulated shortly after the passage of a controversial new investment law, which has sparked protests by Indonesian students and workers. The claim is false: the video's audio has been manipulated in the misleading posts; the video actually shows the former minister speaking to fishermen who were protesting a ban on a type of fishing net in 2018. 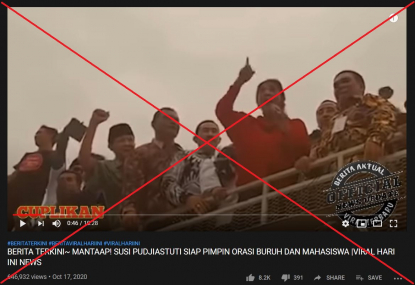 “LET’S FIGHT FOR OUR RIGHTS THAT ARE TAKEN BY FOREIGNERS.”

Indonesian students and workers have joined large protests against a controversial new investment law that was passed by the Indonesian parliament in early October 2020, as reported by AFP and Indonesian news outlet Kompas.

The video has been viewed more than 820,000 times after it was shared with a similar claim on YouTube here and here; and on Facebook here, here, here and here.

Keyword searches on Google found that the clip of Susi’s speech was published by Indonesian news outlet Kumparan on its YouTube channel here on January 18, 2018.

It is titled: “Susi Pudjiastuti’s Speech in Front of Fishermen.” In the first few seconds of the clip, the footage displays a credit for Indonesia’s presidential secretary press bureau.

Below is a screenshot comparison of the video in the misleading post (L) and the Kumparan video (R):

A comparison between the audio in the misleading posts and the Kumparan video shows that Susi’s speech has been edited.

In the misleading post, her speech can be heard from the 27-second mark to the 47-second mark, interspersed with shots of protesters carrying banners opposing the new investment law.

The audio translates to English as:

Susi: Ladies and gentlemen here today, I want you to be the true master of Indonesia!
Crowd: We agree!

Susi: Not foreigners!
Crowd: We agree!

Susi: What should we do to foreigners? Blow them up? Sink them? Long live Indonesian fishermen!

In contrast, the Kumparan video only shows Susi giving the speech. At the 10-second mark, she greets the crowd, saying: “Ladies and gentlemen here today, please respect the decision that was made today.”

Susi’s dialogue with the crowd starts at the one-minute 57-second mark of the Kumparan video.

The audio translates to English as:

Susi: I want you to be the true master of Indonesia’s sea!
Crowd: We agree!

Susi: What should we do to foreign fishing vessels? Blow them up? Sink them? Long live Indonesian fishermen!

Susi delivered her speech after she and Jokowi met with fishermen protesting the ban of seine nets at the presidential palace in Jakarta on January 17, 2018, as reported by Kompas here and The Jakarta Post here.