A video shared thousands of times on Facebook purports to show a farewell flypast in honour of South African Airways (SAA), the country’s bankrupt national carrier. The footage, however, was taken last year during a rehearsal in preparation for the presidential inauguration.

The video caption partly reads: “4 SAA pilots were granted permission to do a final fly-by over OR Tambo this morning as the last farewell to a once proud and joy of SA (sic).” 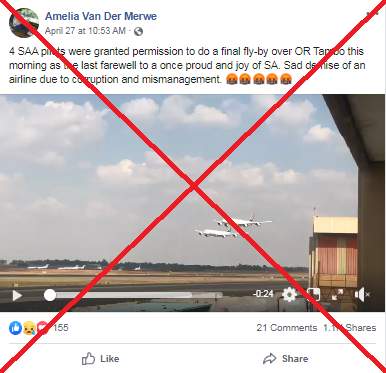 A screenshot taken on May 4, 2020 of the misleading post

The claim has been duplicated in other posts, including here, here, and here.

As reported by AFP, South Africa's cash-strapped national carrier is on its last legs after years of mismanagement and debt, as plans for its rescue have been hampered by the coronavirus outbreak.

“The video was taken last year as part of practice and rehearsal in preparation for the presidential inauguration fly past which SAA successfully executed,” Tlali said.

“Some conspiracy theorists, motivated by malice, it appears, have turned this video into some propaganda to achieve their own ends. It is not what they claim it is.”

On May 25, 2019, South Africa inaugurated its sixth democratically-elected president as covered locally here and here. The clip below shows the flypast from the inauguration day.

Meanwhile, the ban on both domestic and international passenger flights during the country’s COVID-19 lockdown remains in place, except for repatriation flights either bringing back South Africans or transporting foreign nationals to their homes, said South Africa’s Transport Minister Fikile Mbalula.