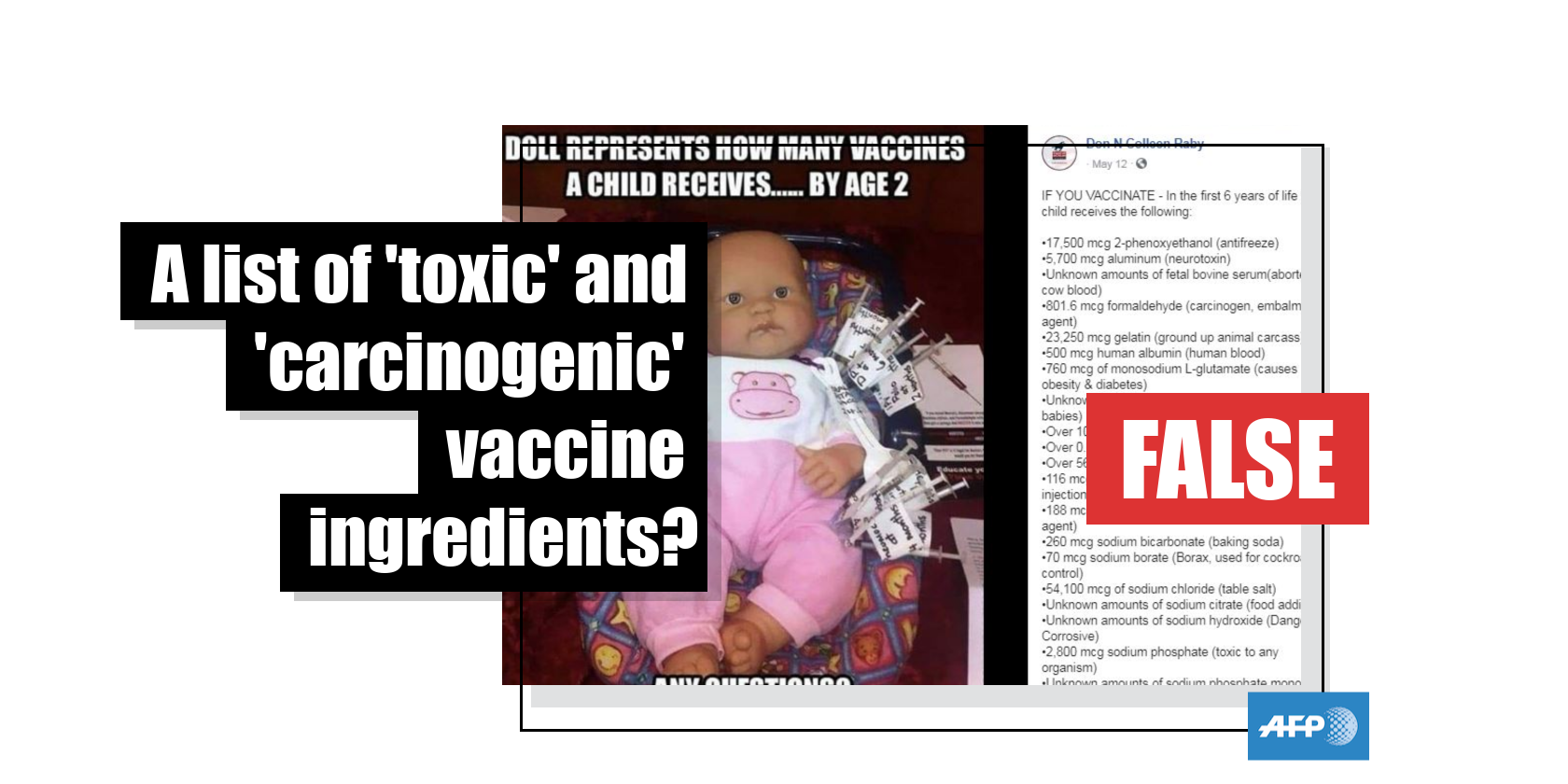 A post shared tens of thousands of times on Facebook claims that a list of 26 substances, some said to be “carcinogenic” or “toxic,” will be administered to children six years old and younger through vaccination. The claim is false. Although some of the ingredients listed do feature in children’s vaccines, the doses involved are not toxic, pass through the body and ensure the reliability of the vaccination, according to health experts.

The post, shared more than 20,000 times in English on Facebook in May 2020, lists 26 substances, claiming: “In the first six years of life your child receives the following”. The list is posted alongside a picture of a baby doll with 20 medical syringes injected into it. The claim also circulated in French and Dutch. 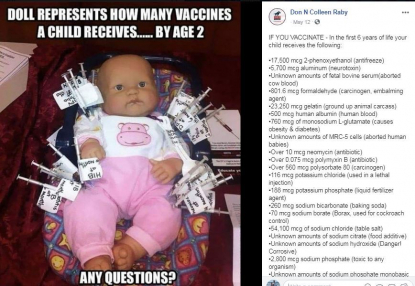 Contrary to what is claimed in the post, the listed substances are not toxic, lethal or carcinogenic when used in small doses. Health Canada points out that vaccines may contain “minute amounts of chemicals that are used during the production process, such as for the growth or purification of specific antigens or the inactivation of toxins.”

Here are some specific examples where specialists examined the individual ingredients and found the doses are too small to be toxic.

The post questions the use of “801.6 mcg (micrograms) formaldehyde (carcinogen, embalming agent)” in vaccines.

According to Health Canada, formaldehyde is “used to inactivate viruses and protein toxins” in the production stage of the vaccine.

Although the dosage in the post is roughly correct, the implication of its risks is misleading.

“Children are exposed to many of these ingredients at a far higher dose through other natural sources,” Dr Natasha Crawcroft, Director of the Centre for Vaccine Preventable Diseases at the University of Toronto told AFP via email. “For example, pears include 50 times more formaldehyde than any vaccine.”

This is confirmed by the University of Oxford’s Vaccine Knowledge Project: “The amount of natural formaldehyde in a two-month-old infant’s blood (around 1.1 milligrams in total) is 10 times greater than the amount found in any vaccine (less than 0.1 milligrams).”

It is also incorrect to describe the dosage of formaldehyde in vaccines as an “embalming agent.”

“To embalm a body you need something like 6-10 liter of formaldehyde – it’s nothing at all like the tiny amounts in vaccines,” Crawford said.

“One aspect that is not made clear is the importance of dose. Everything including water can be lethal if given in too large a dose, but can at the same time be essential for life at the right dose. This is true of potassium and sodium chloride, for example,” Crawcroft said.

Professor Francois Chast, Honorary President of France’s National Academy of Pharmacy told AFP: “A dangerous dose would be over 1 to 2 grams; 116 mcg is a dose 10,000 times smaller than that.”

Chast also explained that lethal injections are administered intravenously. “Vaccines are not injected into a vein.”

The use of “potassium phosphate” and “sodium bicarbonate” are also questioned by the post. Additives such as potassium or sodium salts are used in vaccines and medication to “help control product acidity (pH) and maintain the quality of vaccine antigens,” according to Health Canada.

The post also condemns the use of “antibiotics” in vaccines.

These antibiotics are used at the production stage of the vaccine “to prevent contamination during viral cell culture,” according to Health Canada.

These products are excipients, or inactive ingredients used to help preserve medications and vaccines and to facilitate their administration.

These excipients are very quickly eliminated by the body and do not accumulate in a child’s body over time.

The University of Oxford’s Vaccine Knowledge Project adds that “antibiotics which commonly cause allergic reactions (such as penicillins, cephalosporins and sulphonamides) are not used in vaccines.”

The post criticises the use of “5,700 mcg aluminum” which it describes as “neurotoxin.”

This substance is used as an adjuvant. According to Health Canada, these allow a “reduction in the amount of antigen per dose or the total number of doses needed to achieve immunity,” meaning that without them, patients might require much larger or more doses for the vaccines to be effective.

The University of Oxford adds: “the amount of aluminium present in vaccines is small -- less than 2 milligrams of the salts, and less than a milligram of actual aluminium.”

This Health Canada study concluded that a toddler between the ages of six months and fouryears ingests over 1.5 milligrams of aluminum through normal consumption of drinking water, food, beverages, air and soil in the space of three days.

The post lists “23,250 mcg gelatin (ground up animal carcass)” and “Over 560 mcg polysorbate 80 (carcinogen)” as being present in the vaccines.

The Centres for Disease Control and Prevention in the United States states that gelatin is used “to keep the vaccine effective” after it is manufactured.

Gelatin is commonly consumed by “eating food such as Jell-O” and it “resides in the body naturally”.

Polysorbate 80 is “a common food additive used in several vaccines as an emulsifier (to hold other ingredients together),” according to the University of Oxford. “Compared to its use in foods, there is very little polysorbate 80 in vaccines.”

The list is posted with a picture of a doll being injected with 20 medical syringes. These are alleged to represent “how many vaccines a child receives by age two”.

This is misleading. Canada does not have national mandatory vaccination, with Ontario and New Brunswick being the only provinces requiring them for a child to attend school.

Following the recommended vaccination schedule, a two year old child in Canada would have received eight vaccines, spread across 17 or 18 doses.

In the United States they would receive 10, spread across 33 or 34 doses, up to the age of two.

The total number of doses will vary as some vaccines can be administered through a single injection or multiple shots.

Vaccine ingredients are a regular source of misinformation. AFP Fact Check has also investigated misleading posts about the flu shot and the ingredient thimerosal.