A video has been viewed thousands of times in multiple posts on Facebook and Twitter alongside a claim it shows a Muslim politician in India urging a police officer to open a mosque in order to allow people to pray during the nationwide COVID-19 lockdown. The claim is false; the video has actually circulated online since at least 2016 in reports about a noise complaint at a Mumbai mosque.

His comments in Hindi translate to English in part as: “These people are innocent and living here for forty years. Please don’t trouble them. We are offering prayers in this mosque for forty years, don’t try to shut the mosque, don’t try to shut down the loudspeaker, and don’t enter the mosque at night with shoes on. The women have complained that police entered into their rooms during the night.

“We are law abiding citizens and do our work as per the rules and regulations, but we’ll not tolerate it if you do injustice to us or show high handedness. Deshmukh sir, leave us as we are. We operate by the law but you can shoot me if you want and you have courage, we are ready… Let the mosque function as usual and keep the loudspeaker on as it was.” 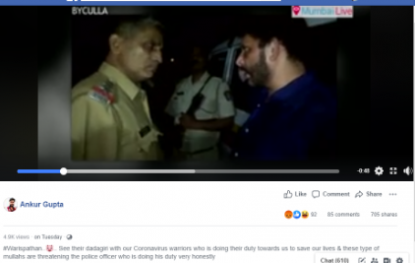 The post caption states: “#Warispathan... See their dadagiri with our Coronavirus warriors who is doing their duty towards us to save our lives & these type of mullahs are threatening the police officer who is doing his duty very honestly”.

Waris Pathan is spokesperson for the All India Majlis-e-Ittehad-ul-Muslimeen (AIMIM), a regional political party with a stronghold in the Indian state of Telanagna. He also served as a Legislative Assembly member for Maharashtra from 2014 to 2019.

“Coronavirus warriors” is a term coined by the Indian government for those at the forefront of the COVID-19 response, including doctors and the police.

“Mullahs” is a word for “an educated Muslim trained in religious law and doctrine and usually holding an official post”, according to the Merriam-Webster dictionary.

The claim is false; the video has circulated online since at least 2016.

A keyword search on Google found a longer version of the video published here on the YouTube channel of the Indian news outlet “Mumbai Live” on November 16, 2016.

Its description reads: “Video of MIM MLA Waris Pathan abusing police has gone viral. This happened when police asked Pathan to lower down the loud speaker’s voice which did not go well with Pathan and he started abusing the police.”

A further keyword search found another longer version of the video published here on the official YouTube channel of the AIMIM, dated November 14, 2016.

The video's caption states: “Yesterday's Night Situation was tensed at Byculla due to issue of Loudspeakers at Mosque..!”

Sir @CPMumbaiPolice I would like to bring it to your notice that some people are trying to spread false news in this pandemic by posting 5yrs old video where the issue of loudspeaker was resolved after my timely intervention in the presence of Cops. @asadowaisi

Addressed to Mumbai Police, the Twitter thread reads: “Sir @CPMumbaiPolice I would like to bring it to your notice that some people are trying to spread false news in this pandemic by posting 5yrs old video where the issue of loudspeaker was resolved after my timely intervention in the presence of Cops. @asadowaisi.”

“After my intervention issue was resolved & the Cops present there also thanked me for it. I would to urge @AnilDeshmukhNCP & @MahaCyber1 to take note of these fake posts & take action as per law, dont let any miscreants disturb the peace of nation & state. Fake news must stop.”