This video shows a fire at a car park in Malaysia, not Singapore

A video has been viewed thousands of times in multiple posts on Facebook and YouTube alongside a claim it shows a fire at a car park in Singapore. The claim is false: the video actually shows a fire in the Malaysian capital of Kuala Lumpur.

The one-minute 32-second video shows smoke billowing from a fire in a car park. The video has embedded text stating “Clementi” in both English and simplified Chinese.

Clementi is a town in the west region of Singapore. 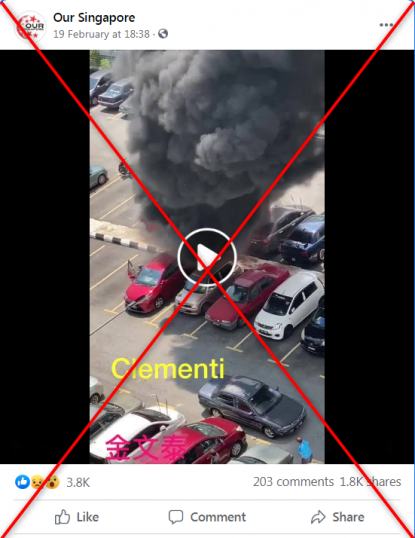 Part of the article reads: “Seven vehicles in a parking area of a People's Housing Project (PPR) in Pantai Dalam, here, were destroyed in a fire today.

“Brickfields district deputy police chief Supt Basri Sagoni said a team was deployed to the location at about 12.45pm after they received a report regarding the incident.

“He said seven vehicles of various models were found burned in the car park area of the PPR and the fire forensics team who was also fetched to the location found a bottle smelling of petrol."

The Malaysian police released this statement and photos about the incident.

Translated from Malay, part of the statement reads: “On February 17, 2021, around 12.45pm, the Police received information regarding a case of arson resulting in fires to cars. A Malay woman alerted to the fire occurring at a (public) car park in the area of a PPR in Pantai Dalam, Kuala Lumpur. The Police went to the scene of the incident and as a result of the investigation, found as many as (7) vehicles of various brands had been burned. The case is investigated under Section 435 of the Penal Code.

Here is a Facebook post published on the same day which shared the video in the correct context.

Below is a screenshot comparison of the video from the misleading Facebook post (L) and the video with the correct location (R): 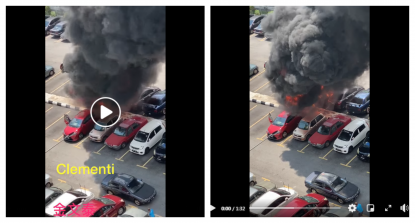 The same car park in Kuala Lumpur can be seen here on Google Maps.

Below is a screenshot comparison between the video from the misleading Facebook post (L) and the location on Google Street View (R):