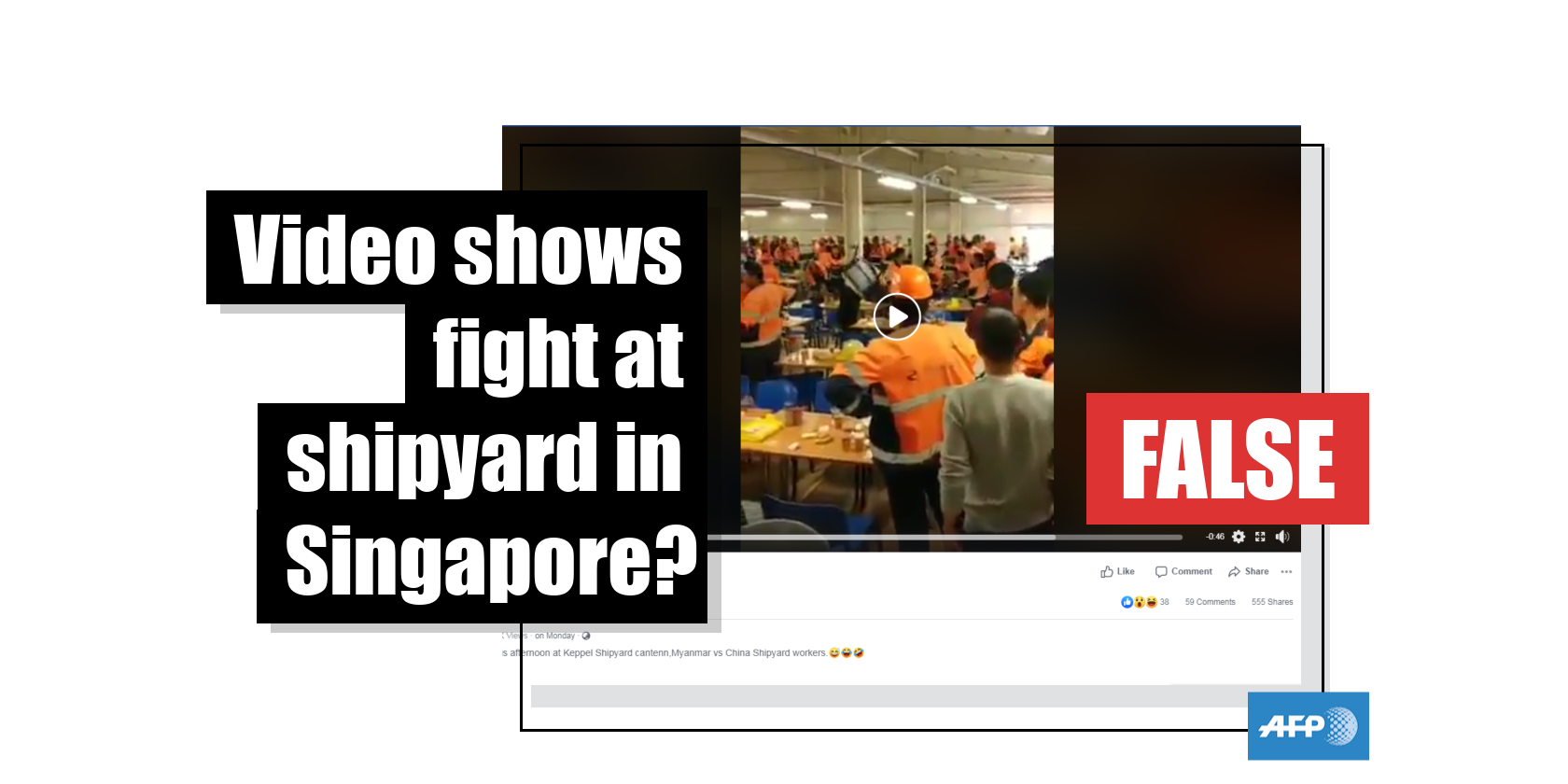 A video has been viewed thousands of times in multiple Facebook posts which claim it shows a fight between workers from Myanmar and China at a shipyard in Singapore. The video is being shared in a misleading context; the video has circulated in Russian-language reports about a fight in a canteen at a gas processing plant in Russia in September 2019; Singapore Police and the Singapore shipyard owners both separately denied the incident happened in Singapore. Keppel Shipyard is based in Singapore. Here is its official website.

The claim is false, however; the video is being shared in a misleading context and actually shows an incident at a gas processing plant in Russia.

AFP conducted a reverse image search of a keyframe extracted from the video using verification tool InVid and found this report published by Russian news site Steer.ru on September 12, 2019. It article describes a fight which broke out between workers at a gas processing plant in Amur Oblast, Russia.

The report’s first paragraph translates to English as: “A video of workers brawling in Amorskiy gas processing plant in Svobodny was picked up by social networks today. The internet exploded with images of Amorskiy plant workers brawling during lunchtime today at the canteen. The reasons the fight broke out are still unclear, however a number of active users say it may have been caused by personal tensions.”

Svobodny is a town in Amur Oblast, Russia.

A screenshot of the video was also included in this article published by Russian-language site 2x2.su on September 16, 2019. The article’s headline translates to English as: “Amorskiy plant workers fired after fight.”

The photo’s caption translates to English as: “Management said gross violations of worker discipline lead to the dismissals.”

The first two paragraphs translate to English as: “All workers who took part in the Amorskiy plant canteen fight were fired. The dismissals were made because gross violations of work discipline occurred.

“Those involved in the incident were identified. It took place on September 12 in one of the canteens in the workers’ village on the construction site of the Amorskiy gas processing plant.”

This is the plant where the fight was reported to have broken out.

In an email to AFP on October 8, 2019, a representative from Keppel Corporation said the incident did not happen within the Keppel facilities in Singapore.

The Singapore Police Force also stated the video in the misleading posts was not filmed in Singapore in this Facebook post on October 1, 2019.

The post’s caption stated: “[MASS BRAWL DID NOT HAPPEN IN SINGAPORE]

“The Police would like to clarify that the video circulating online that showed a mass brawl involving workers did not happen in Singapore.

“Members of the public are advised not to spread untruths which can cause unnecessary public alarm.”