A video has been viewed tens of thousands of times in multiple Facebook posts published in October 2019 alongside a claim that it shows a policeman strangling a protester to death. The claim is false; the video has circulated in media reports since September 2019 about a man who pretended to be possessed after he allegedly attacked a traffic police officer; one television report shows him speaking to police officers after he was detained.

The 59-second video shows a policeman pinning a young man on the ground. 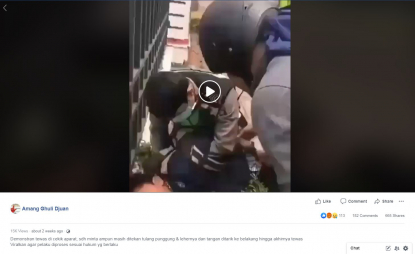 The post’s Indonesian-language caption translates to English as: “A protester is dead after being strangled by an officer.

“He had begged for mercy but he was continuously pressed on the back and his neck and arms were pulled backward until he died.

“Make this viral so the perpetrator is processed according to the law.”

The same police uniform with the fluorescent green vest can be seen worn by other police officers here on the Instagram account of the Indonesian National Police’s public relations department.

The same video was also shared alongside a similar claim here and here, where it was viewed more than 92,000 times before it was deleted.

Thousands of students held mass rallies across Indonesia for several days in September to protest several controversial bills and laws, with protests in several cities ending in clashes between protesters and police. Here is an AFP report published on September 24, 2019, about the protests.

The claim in the misleading posts is false. The video has circulated in media reports since September 2019 about a man who pretended to be possessed after he allegedly attacked a traffic police officer.

Keyword searches on Google found this September 16, 2019, news video published on YouTube by Indonesian broadcaster GTV. The report is about a university student who allegedly attacked a traffic police officer.

Indonesian language text on the video states the incident occurred in Pontianak, the capital city of West Kalimantan province, on September 16, 2019.

The title of the one-minute and 45-second video translates to English as: “This university student ranting because he doesn’t accept to be given a ticket.”

At the 47 second mark of the video, the narrator's comments translate to English as: “According to the police, before this university student acted weird, he did not accept when he was asked to change to the right lane as the left lane was full of trucks parked on the sideroad due to a protest of truck drivers. The student refused to do so when he was asked, and he immediately grabbed the uniform of an officer. It was suspected he was afraid of being accused of fighting an officer, and the student pretended to be possessed.”

The student’s blue jacket is identical with the jacket of students at Tanjung Pura University in Pontianak, which can be seen here in the Facebook page of the university’s students association.

Below is a screenshot comparing the video in the misleading posts (L) and the GTV news report (R); AFP has highlighted key features in red. 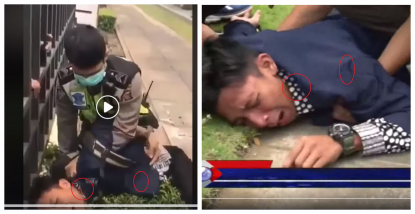 At the 36 second mark in the GTV video, officers can be seen carrying the student to a police station to question him. 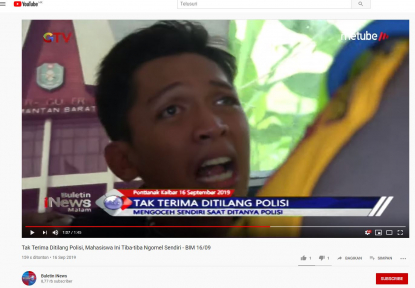 The student speaking with a police officer on GTV video

The incident was also reported by iNews in this September 20, 2019, report.

The title of the iNews video reads in English as: “A student pretends to be possessed after he fights with a police officer.”

This photo shows a building in South Korea; it has been doctored to include Arabic writing