A video that shows a motorcyclist falling into a pothole on a flooded street has been viewed hundreds of thousands of times in multiple Facebook and YouTube posts alongside a claim the incident happened in the south Indian city of Hyderabad. The claim is false; this is a four-year-old video from Brazil’s south-eastern city of Sao Paulo.

Hyderabad is the capital city of the south Indian state of Telangana. 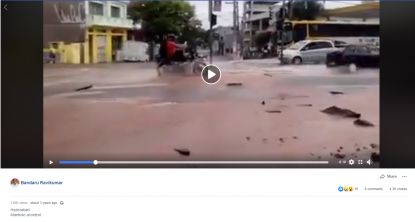 The claim is false; the video shows an accident in Brazil’s Sao Paulo city in January 2015.

A reverse image search on Yandex using keyframes from the video obtained with video verification tool InVID and a subsequent keyword search found this identical video published on YouTube on January 28, 2015.

A video report about the same accident was published here on CBS News’ official YouTube channel on January 27, 2015.

The video’s title states: "Motorcyclist in Brazil hits a pothole."

"Video shows a motorcyclist in Sao Paulo, Brazil, driving into a pothole big enough to swallow his bike. The cyclist walked away unhurt. But the bike? Not so much. A tow truck had to pull it out of the huge hole caused by a broken water main. CBSN's Vladimir Duthiers reports,” says the video description.

CBS News also published the video here on its website.

The incident occurred in Sao Paulo on January 26, 2015, as reported here by a local media outlet.

The Portuguese language report’s opening paragraph translates to English as: “A motorcycle was swallowed by a crater in the Boturussu Park region, east of Sao Paulo, on Monday (26).”

The location of the accident in Sao Paulo can be accessed here on Instant Street View.

Below is a screenshot comparison of the location on Instant Street View (L) and the video in the misleading posts (R) with key identifying features circled in red by AFP:

No, consuming cucumber, coconut or cold water during menstruation will not cause 'uterine cancer' or 'sterility'