A video has been viewed thousands of times in multiple posts on Facebook, Twitter and YouTube alongside a claim it shows a boat sinking off the coast of Indonesia’s Bali island in early February 2021. The claim is false: the video has circulated online in reports about a ferry disaster in the Bali Strait in March 2016. 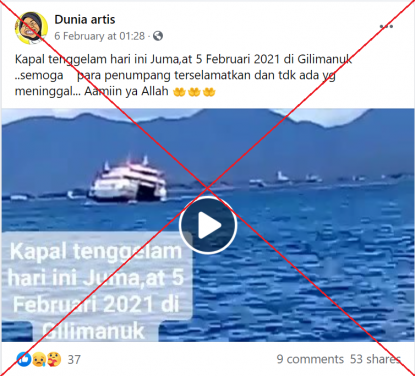 “The ship sank today, Friday, February 5, 2021 in Gilimanuk,” the Indonesian-language caption reads. “Hopefully the passengers will be saved and no one will die.”

Reverse image and keyword searches on Google found this video posted by local media Tribun Jogja on its YouTube channel on March 5, 2016. It is titled: “Amateur Video Moments of the Revalia 2 Ferry Sinking in Bali Strait”.

The Bali Strait is a strait separating Bali island and Java island.

Below is a screenshot comparison between the footage in the misleading post (L) and the Tribun Jogja video (R): 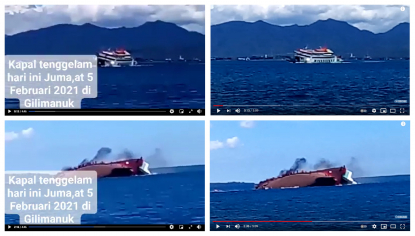 The Jakarta Post, an Indonesian English-language newspaper, reported on March 4, 2016, that the ferry capsized in the Bali Strait while travelling from Gilimanuk to Banyuwangi, a town in eastern Java. Six people were killed in the disaster, according to this Detik.com report.

Jembrana police, which administers Gilimanuk, posted on its Facebook page on February 6, 2021, that the clip is “an old video of the incident on March 4, 2016”.

A Jembrana police official told AFP via WhatsApp message on February 10, 2021 that “there was no incident” at Gilimanuk Harbour in the first week of February.

AFP previously debunked the same video after it circulated with another false claim that it showed a ferry sinking in Lake Toba, in Indonesia’s Sumatra island, in January 2019.