No, this is not a video of a January 15, 2019 Indonesian ferry disaster

Multiple social media posts have shared a video they claim shows a ferry with 183 people onboard sinking into Indonesia’s Lake Toba on January 15. The claim is false: the video actually shows a 2016 boat disaster in another part of the Southeast Asian country and local officials have said there was no accident on Lake Toba that day.

The video has been shared by multiple Facebook accounts, including here where it has been viewed 2,700 times since it was posted January 15. 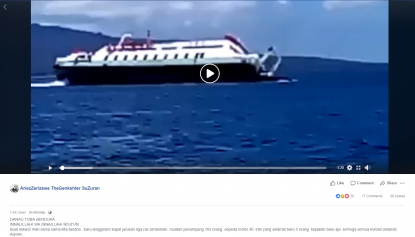 The audio of the video captures people screaming along with a male voice saying “Don’t jump!” in Javanese -- one of the local languages in multiethnic Indonesia -- at 0:22.

The misleading Facebook post is captioned: “Lake Toba is mourning… Let’s pray together: a Tigaras-Simanindo ferry with 183 onboard just sank into the water. It also carried 40 motorcycles. Latest info said there were only three survivors. This incident happened just now. Hopefully, all passengers can be found alive. Amen.”

“Tigaras-Simanindo” refers to a route offered by ferry services on the volcanic lake. In June 2018, an overcrowded ferry sank on Lake Toba, leaving hundreds of passengers missing presumed dead. Here is an AFP report on that accident.

AFP ran video keyframes from the misleading footage through a reverse image search and found that the video had been circulating online since 2016.

Tribunnews.com, an Indonesian news website, posted the video on its YouTube channel March 4, 2016, saying it showed a ferry incident in the Bali Strait, next to the world-famous resort island.

Here is the Tribunnews.com video:

The video was headlined: “Amateur video showing seconds when Revalia 2 vessel sinks in Bali Strait.” The caption links to a Tribunnews.com article about the accident.

Officials have told Indonesian media that there was no ferry incident taking place in Lake Toba on January 15, for example in this Kompas.com article.

“Adj. Sr. Comr. Agus Darojat, the chief of Samosir Police, stressed that the 3-minute, 23-second video claimed to show a sinking ferry on Lake Toba was a hoax. ‘The information spreading on WhatsApp and other social media platforms about a ferry disaster on Lake Toba was a hoax,’ Agus said January 15,” according to the Kompas.com article.

Samosir refers to a large island in Lake Toba.