No, this is not a video of a man in Dubai who caught fire after his cell phone overheated

A video which has been viewed more than a million times on Facebook claims to show a man who caught fire in Dubai after the cell phone in his pocket overheated while being charged with a powerbank. Dubai authorities have said no such incident took place in the emirate and a reverse search found the video showed an incident in Morocco.

The video has been posted on YouTube and Facebook, including here on a Philippine account where it has been viewed more than a million times and shared more than 32,000 times since it was published June 7, 2018.

The footage shows a man in a shopping mall with his clothes on fire as people close to him scream and try to help.

The post’s caption, when translated to English, says: “Be careful when charging and using your cell phone because a man in Dubai had to fight off fire when his cellphone, which he was charging in his pocket using a powerbank, overheated and caught on fire, those who saw him helped douse the flames”. 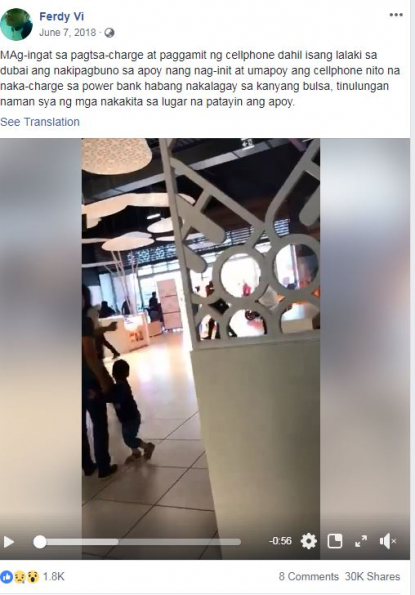 A reverse image search using a screenshot from the video linked the footage to a online report in the Gulf News, an English news site in the United Arab Emirates.

The report, published June 6, 2018, is headlined: “Officials: Video of man on fire did not happen in UAE”.

In the article, both the Dubai Civil Defence and the Dubai police are quoted saying the incident did not happen in the emirate.

The Dubai Civil Defence posted a statement on their Instagram page on June 5, 2018.

The post says in Arabic: “The Directorate General for Civil Protection stated that the video circulating of the explosion of a mobile phone was filmed outside the country, and denies that an explosion happened in a Dubai mall or any other shopping centre in Dubai or in the Emirates”.

The tweet says: "The General Command of the Dubai police denies that the video, which shows a burning person, happened in a Dubai mall and asks that members of the public not spread rumours if they wish to avoid being prosecuted”.

Further reverse image searches of keyframes from the video traced it back to a report in Morocco World News dated June 11, 2018.

The video shows a man who set himself on fire after he was caught shoplifting, the report said, quoting information from Alyaoum 24.

The original Alyaoum 24 report on the incident can be seen here.

It says that the man who set himself on fire was around 30 years old and lived in a small town near Agadir, a tourist city in the south of Morocco.

The Alyaoum 24 report said the man was caught stealing a drill and paid a fine, before returning to the shopping center with a jug of paint thinner to set himself alight.

He died December 10 in a Marrakesh-area hospital, according to the report.

AFP’s Rabat bureau reviewed the video footage contained in the misleading Facebook post and said it clearly depicted an incident in Morocco not Dubai.

The incident in the video happened in a Marjane superstore as the brand’s blue and yellow logo is clearly visible on the interior wall of the store.

Marjane is a Moroccan hypermarket chain and is only present in Morocco.

Here is a screenshot from the clip which shows the Marjane logo:

In addition, the video’s audio recording captures people speaking in the Moroccan dialect of Arabic, as people nearby the man with his clothes on fire scream hysterically.

The video was first shared by the Filipino Facebook account on June 7, 2018, but Crowdtangle data indicate that the post was still being widely shared in January 2019 by accounts with hundreds of thousands of followers.

The video has also been shared by Facebook accounts from around the world, for example from Pakistan here, and Ireland here, and on an Indian YouTube account here.