The image was posted to Facebook by a Fiji-based user here. 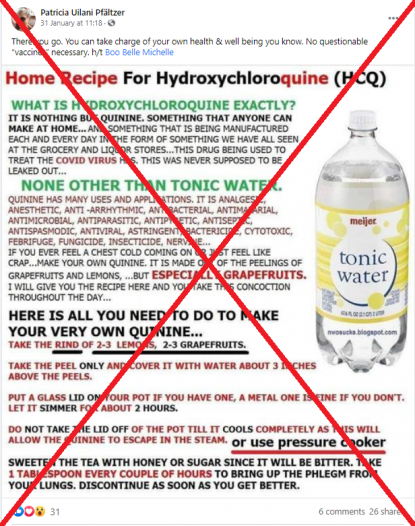 The image shows a bottle of tonic water with the heading: “Home Recipe For Hydroxychloroquine (HCQ)”.

The post goes on to state: “WHAT IS HYDROXYCHLOROQUINE EXACTLY?" It states in part: “IT IS NOTHING BUT QUININE. SOMETHING THAT ANYONE CAN MAKE AT HOME… AND SOMETHING THAT IS BEING MANUFACTURED EACH AND EVERY DAY IN THE FORM OF SOMETHING WE HAVE ALL SEEN AT THE GROCERY AND LIQUOR STORES… THIS DRUG BEING USED TO TREAT THE COVID VIRUS...NONE OTHER THAN TONIC WATER.”

The post includes a list therapeutic benefits of quinine and hydroxychloroquine and includes a purported recipe for quinine, highlighting the use of grapefruits in the concoction.

The Facebook post's caption reads: "There you go, you can take charge of your own health and well being you know. No questionable vaccine necessary."

Hydroxychloroquine made headlines after it was touted by former US President Donald Trump as a treatment for Covid-19 in the early days of the pandemic. The US Federal Drug Administration initially approved the drug for emergency use, however it later revoked its status in June 2020 after trials showed “no benefit for decreasing the likelihood of death or speeding recovery”.

As of February 11, 2021, the Australian Therapeutic Goods Administration also does not recommend hydroxychloroquine to treat Covid-19. The New Zealand Ministry of Health also told AFP in a February 4 email that it does not endorse the drug as a Covid-19 treatment.

AFP has debunked several false claims about the use of hydroxychloroquine as a Covid-19 treatment.

Bruce Russell, an associate professor and parasitologist at the University of Otago, stated the misleading image's purported homemade recipe for making quinine and hydroxychloroquine is erroneous.

Hydroxychloroquine requires a complex chemical procedure “so there’s no way you can just make it in your backyard," he said.

Russell added that the prerequisite ingredients needed to make quinine are not listed in the recipe. “The only place you can get quinine is from the Cinchona bark," he said. "That is the only pharmacologically useful place to extract it."

Nial Wheate, a pharmaceutical chemist and associate professor at the University of Sydney, also debunked the purported recipe.

"It is impossible to make your own quinine following this recipe with the stated ingredients," Wheate told AFP in an email on February 10, 2021.

Russell warned using grapefruit in the purported homemade recipe could be dangerous.

“The compounds you find in grapefruit block a very important liver enzyme that blocks the breakdown and metabolism of drugs,” he said. “If you take certain medications and wash it down with grapefruit juice it inhibits your liver from breaking down those drugs."

Russell added that improper consumption of grapefruit juice or extract could cause serious illness if combined with certain medicines.

Wheate also said that while the post's purported recipe would not pose an immediate risk, it "could have more long term health dangers if it interferes with their other medicines."

The US Food and Drug Administration warns against consuming grapefruit juice and certain medications here.

Quinine is an organic compound derived from the bark of Cinchona trees and is used as an anti-malaria drug.

Hydroxychloroquine is a synthetic compound that can be used to treat a range of ailments including arthritis and malaria, according to the US Centers for Disease Control and Prevention.

“There are similarities in the chemical construction but they are different and they act quite differently,“ he said.

Russell added that both chemicals can be used to effectively prevent and treat malaria, but added that improper consumption can be dangerous. “There have been plenty of cases where people have overdosed on them and died," he stated.

A comparison of the chemical structures of quinine and hydroxychloroquine are below:

A photo collage of the different chemical structures of quinine (left) and hydroxychloroquine (right), images taken from Wikimedia Commons.