Skip to main content
Supporters of President Donald Trump clash with police as they storm the US Capitol in Washington, DC on January 6, 2021 (AFP / Roberto Schmidt)

Social media posts and articles shared more than 100,000 times accuse Democratic Representative Alexandria Ocasio-Cortez of exaggerating her experience and misleading viewers of an Instagram livestream because she was not in the US Capitol during the January 6, 2021 riot. But the lawmaker did not claim in the video to have been inside the Capitol, and instead made clear that she was at her office -- located in a nearby building -- when the unrest broke out.

“AOC Wasn’t Even in the Capitol Building During Her ‘Near Death’ Experience,” the headline on a February 3, 2021 article from conservative news site RedState said. 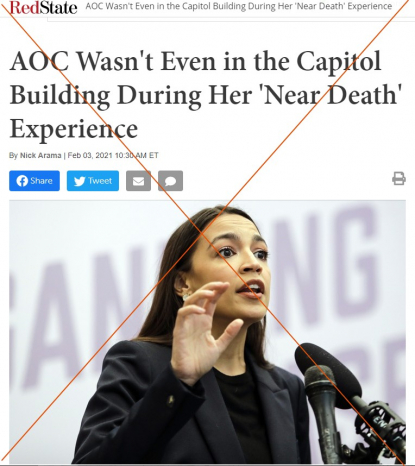 Screenshot taken February 5, 2021 of an article

RedState’s article was cited by others including Trending Politics which said she had been called out over a “massive hoax,” as well as on Twitter, and in a Facebook post by author and filmmaker Dinesh D’Souza. In a February 5 Facebook video, D’Souza further addressed the congresswoman’s purportedly “fake account.”

Ocasio-Cortez has been a regular target of criticism from Republicans and former president Donald Trump.

She posted her nearly 90-minute Instagram live video on February 2, beginning with a revelation that she was a sexual assault survivor. “Trauma compounds on each other,” she said.

Almost a month earlier, hundreds of Trump supporters had invaded the domed Capitol, where legislators were meeting to certify Joe Biden’s victory, in a riot fueled by false claims of fraud in the 2020 presidential election.

The unrest led to the deaths of five people and prompted the House of Representatives to impeach Trump on a charge of incitement of insurrection. His Senate trial began February 9.

Although her video is titled “What Happened at the Capitol,” she never claims in the clip to have been at the legislative building itself during the January 6 violence.

“Members of Congress, except for the Speaker and other very, very high ranking ones, don't actually work in that building with the dome. There's buildings right next to the dome and that's where our actual offices are,” she said in the video.

Hers is in the Cannon House Office Building southeast of the Capitol, which Google Maps shows as being roughly 200 yards away. 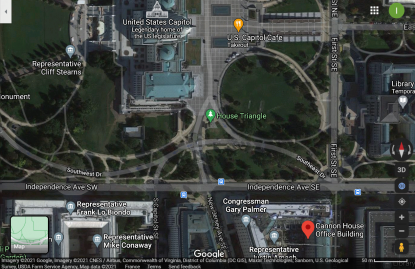 Screenshot taken February 8, 2021 showing the Cannon House Office Building in relation to the US Capitol

Ocasio-Cortez said there was a moment on January 6 when she “thought everything was over” and that she was going to die after an unidentified man repeatedly banged on the door of her office, prompting her to hide in a bathroom while he yelled, “Where is she? Where is she?”

When her staffer said it was OK to come out, she saw it was a Capitol Police officer, who told them to go to another building but did not accompany them.

She fled to the Longworth House Office Building, which is connected by a tunnel network and was under a shelter-in-place order.

Ocasio-Cortez said she and her staffer eventually ran into Representative Katie Porter, who let them hide in her office in Longworth.

Even those on the periphery of potentially traumatic events can experience emotional distress.

“We know that there are acute reactions and stress that are nearly universal,”  said Farris Tuma, chief of the Traumatic Stress Research Program at the National Institute of Mental Health, who was speaking generally and did not discuss what happened to Ocasio-Cortez.

“Not everybody experiences the same thing the same way,” however, Tuma said.

So it is likely that not only those at the epicenter of an event, but “people close to what happened in one way or another, either physically close or because of a relationship and a connection they have with someone,” would experience distress, anxiety and worry, he said.