A collage comparing two images — one that appears to show a rock formation in Bulgaria and another of a near-identical formation in a purported “original NASA photo of Mars” — has been shared hundreds of times on Facebook since 2014. The image comparison, however, is a hoax; NASA stated that the purported Mars photo was not taken by the US space agency.

The image was posted to a Facebook group called “Collective Action Against Bill Gates. We Wont [sic] Be POISONED!!!” here on February 4, 2021. 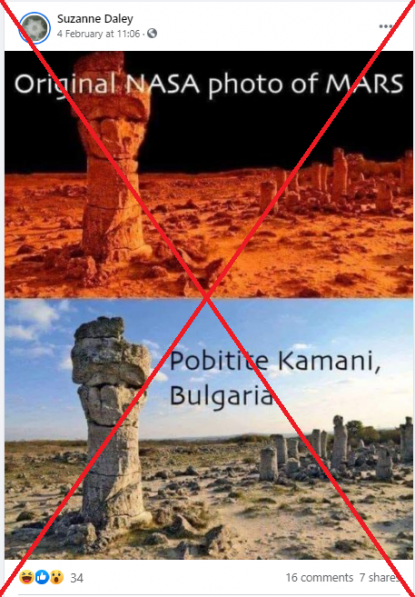 The image features a photo comparison of two images.

The bottom photo shows what appears to be the site of a rock formation and includes superimposed text that reads: “Pobitite [sic] Kamani, Bulgaria.”

The top photo shows an identical rock formation, but in a red hue and with a black background. The superimposed text over the top image reads: “Original NASA photo of MARS.”

The image comparison was also shared hundreds of times on Facebook here, here and here.

The image comparison, however, was shared alongside a false claim.

NASA told AFP in a February 6 email the top image in the purported comparison “is not a NASA photo of Mars”. The image is also not listed on NASA’s publicly available Mars Media Library as seen here.

A reverse image search of the bottom photo in the image comparison found that it does appear to show a rock formation in Pobiti Kamani, which is a protected geological site in Bulgaria.

The photo was published on travel blogs about Pobiti Kamani here and here. The rock formation matches those seen here in a YouTube video promoting tourism at Pobiti Kamani and here on the site’s Tripadvisor page.