Skip to main content
US President Joe Biden gives a thumbs up as he boards Air Force One before departing from New Castle Airport in Delaware on February 8, 2021 (AFP / Mandel Ngan)

Age of consent not lowered by Biden administration

An image of a purported CNN news story shared on social media claims that President Joe Biden’s administration has lowered the US age of consent to eight. The claim is false; age of consent laws do not fall under presidential jurisdiction, and the screenshot of the article is doctored from an unrelated CNN story.

“Biden administration lowers age of consent to 8,” claims the headline in the post, versions of which have been shared in the United States and Australia since the end of January 2021. 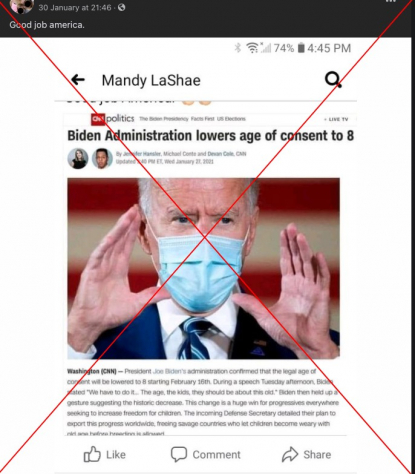 The posts associates the headline with a CNN article written by Jennifer Hansler, Michael Conte and Devan Cole. The article below wrongly claims that President Biden said “we have to do it... the age, the kids, they should be about this old”.

“CNN did not report any such story. The image is fake and quite frankly, appalling,” Matt Dornic, CNN’s head of strategic communications, told AFP by email.

Jennifer Hansler and Michael Conte independently confirmed to AFP that the image was doctored. Hansler added that this article about Biden’s pick for United Nations ambassador was the original. It matches the January 27, 2021 time and date of the doctored image.

A search of the CNN website showed no articles stating that the Biden administration tried to change the age of consent.

Similarly, a search of the White House press website also did not reveal any action aimed at changing the minimum age.

“It’s impossible for any President to reset the age of consent across the nation for all adult activities. Practically speaking, only the state legislatures and Congress can make binding law to effectuate such a change in the age of consent,” Jennifer Drobac, a law professor at Indiana University, said by email.

“Most age of consent laws (for marriage, consensual sexual activity, and other adult behaviors) are made on the state level by state legislatures,” Drobac added.

This was confirmed by Janet Halley, a professor at Harvard Law School who said by email: “President Biden can’t change those – he has no authority over the state provisions and Congress has to legislate to change any age of consent provisions in federal statutory law. I am unaware of any effort he may be making in this area.”

AFP contacted the White House for comment and received no response.

According to the US Department of Health and Human Services, the lowest age of consent for sexual intercouse set by the states is 16.

AFP has debunked similar misinformation, linked to QAnon conspiracy theory groups, surrounding age of consent laws. False claims that Justice Ruth Bader Ginsburg wanted to lower the age of consent to 12 were shared in the United States and reforms aimed at ending age discrimination against the LGBT community were falsley linked to pedophilia in Canada and California.