This video shows clashes in Iraq in 2020, not at Chad’s presidential palace

A video of a firefight has been circulating on social media alongside a claim that it was filmed at the presidential palace in Chad on the evening that President Idriss Déby’s death was announced. However, this video was filmed in Iraq in 2020 during clashes between two armed groups. AFP Fact Check had already verified this video, which has no connection to the current events in Chad.

The footage appears to show bullets lighting up the night sky in a parking lot. The posts shared on social media claim that the video shows gunfire around the presidential palace in Chad’s capital city, N'Djamena. The 30-second video appeared on Instagram (see here and here) on April 21, 2021.

In French, the same video became viral quickly, but many of the most widely shared posts were later deleted.

Death of Chad's president and a contested political transition

The video was posted after the recent announcement of the death of President Idriss Déby, 68, who died from injuries he sustained when fighting alongside Chad’s army against rebels in the north of the country, according to official statements. The day before his death was announced, he had been declared winner of the presidential election with 79.32% of the vote.

This council of 15 generals, known for being loyal to Déby, also dissolved the National Assembly and the government. Déby’s son has assumed "the functions of President of the Republic, Head of State, and Supreme Commander of the Armed Forces," according to the transitional charter, published on April 21. 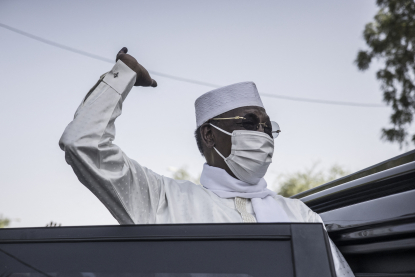 On Wednesday, April 21, 2021, a group of Chadian opposition political parties denounced the council’s actions as "an institutional coup", and called "for the establishment of a transition led by civilians (...) through an inclusive dialogue".

The opposition also told “the Chadian population not to obey the illegal, illegitimate and irregular decisions taken by the CMT, in particular the transitional charter, the curfew and the closure of borders,” as AFP reported here.

Rebels from the Front for Change and Concord in Chad (FACT) have led an offensive against the Chadian regime from Libya for the past twelve days and promised to bring the fight to N'Djamena. The rebel group "categorically" rejected the military council. "We intend to continue the offensive," FACT spokesman Kingabé Ogouzeimi de Tapol said on April 20.

However, the disputes over Chad’s future government did not lead to gunfire around the presidential palace on the night the former president’s death was announced, as some social media users falsely claimed.

This is not the first time that this video has circulated on social media. AFP Fact Check already verified this video in November 2020 and wrote about it here in Arabic. The video was filmed in Iraq and has no connection to the recent events in Chad.

The footage shows a fight between the Al-Bu Ali and Al-Nawafil tribes in the area of Al-Kahla in southern Iraq. The hour-long battle left several people injured. Journalists from AFP’s Baghdad office confirmed this information and explained that the vehicles seen in this video, decorated with the Iraqi flag, belong to Iraqi coast guards. 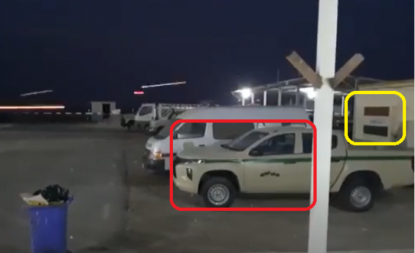 Former president Idriss Déby was a critical Western ally in the fight against jihadists in the Sahel, and his death has created uncertainty about the region’s future.

Chad has been a key player in the fight against the Nigerian Islamist group Boko Haram. The country also provides the second largest contingent for the United Nations Mission in Mali (Minusma) and is an important member of the joint G5 Sahel force, which includes Mauritania, Mali, Chad, Burkina Faso, and Niger. Chad also has troops stationed in Niger, which is known to be a refuge for Sahelian jihadist groups.