Skip to main content
Former US president Barack Obama gives a thumbs up after attending the inauguration of President Joe Biden at the US Capitol in Washington, DC on January 20, 2021 (AFP / Pool / Patrick Semansky)

A Facebook post shared thousands of times appears to picture former US president Barack Obama standing next to a sign that says  “420,” referring to the celebration of weed held April 20. But a reverse image search reveals the photo has been digitally altered; the original was posted on the Obama White House Instagram account in 2015 and the sign read “1961,” not “420.”

The image, shared by rapper Rico Freeman, features Obama in sunglasses leaning against the sign, smiling. “Happy Holidays,” reads the caption of the April 20, 2021 Facebook post shared more than 2,500 times. 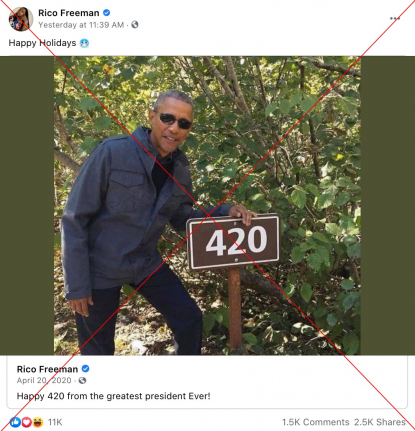 AFP Fact Check conducted a Google reverse image search which yielded this web page where the sign in the picture reads “1961” and identifies the photo as a 2015 Instagram post.

The original depicts the former president beside a sign saying “1961” and is captioned: “Markers throughout Exit Glacier show how much it's receded over time. The impacts of climate change are real, and the people of Alaska are living with them every day. It's never been more important for us to work together to address this challenge.” 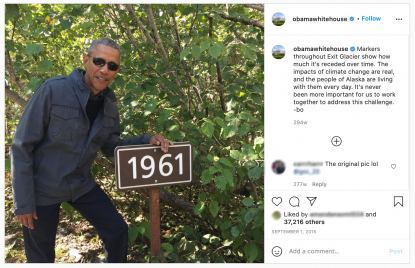 Obama has been open about his past cannabis use.

Posters, fridge magnets and mouse pads are sold online with the altered image, and this Pinterest account also markets prints of the photo.

Possession of small amounts of marijuana was legalized in the US capital in 2015, and weed is legal in several other states. But federal law classifies the plant as a controlled substance.