Facebook posts shared multiple times have used a purported screenshot of a tweet to claim that Muhoozi Kainerugaba — a son of Ugandan President Yoweri Museveni and a high-ranking military officer — had threatened to “crush” the Buganda Kingdom in Uganda. But the Facebook posts are false; there is no evidence Kainerugaba made such remarks on Twitter. AFP Fact Check further established the tweet was fabricated, while a Ugandan defence official dismissed the posts as “fake news”.

“Buganda Kingdom Am here to remind you that we shall crush you like we have done in the past and am assuring you that you can completely do nothing about it. We have the guns and we have the power. Let me hope hope you have clear seen your so called kabaka we shall completely crush and leave no stone un turned (sic),” reads the screenshot of the purported tweet, which was shared in several Facebook posts (here, here and here).

The purported tweet refers to Buganda’s traditional ruler, Kabaka Ronald Muwenda Mutebi II, whose health has been in question since he appeared in a frail state in a birthday video from April 13, 2021. There was speculation he had been poisoned, but these allegations were dismissed by Buganda’s Prime Minister, Charles Mayiga. 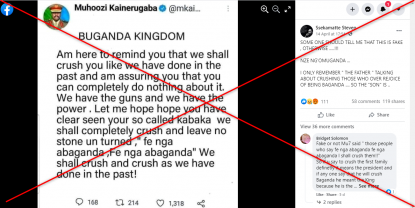 Buganda is a traditional kingdom in Uganda. In 1966, then-prime minister Milton Obote ordered Ugandan troops to storm the Buganda palace in Kampala. A year later, Buganda and other kingdoms within Uganda were abolished.

Buganda Kingdom was restored in 1993 by Museveni’s government, but relations have been fraught — the Ugandan government has accused some Bugandan officials of being in cahoots with the opposition, including during the last general elections.

Despite the tensions, the Facebook posts are false, and the tweet purportedly sent by Kainerugaba, one of Museveni’s children, was fabricated.

AFP Fact Check analysed the purported tweet in the screenshot shared on Facebook and found one visual cue that did not correspond with how tweets normally appear on a phone or desktop.

In the fabricated tweet, there is no publication date or time, information that appears alongside the username in real tweets. 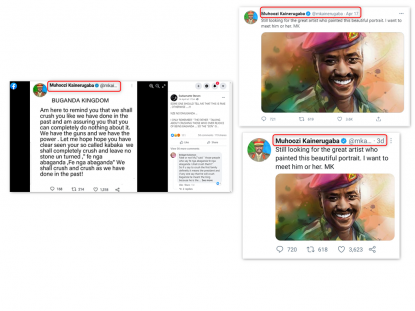 A screenshot showing the fabricated tweet on the left, and the screenshot of tweets as appearing on desktop (upper right) and mobile phone (lower right)