A video of men and women sing an Arabic song has been viewed thousands of times on Facebook alongside a claim that it shows people celebrating the Prophet Muhammad’s birthday in the US. The claim is false; the video shows the celebration of the birthday of the Prophet Muhammad in Bosnia and Herzegovina in 2014.

The four-minute, seven-second clip was published here on Facebook on November 10, 2019. It has been shared more than 700 times.

A group of men and women can be seen singing in the first three minutes, 56 seconds of the video.

The post's Indonesian-language caption and text superimposed on the video translate to English as: “The Prophet’s birthday in America”. 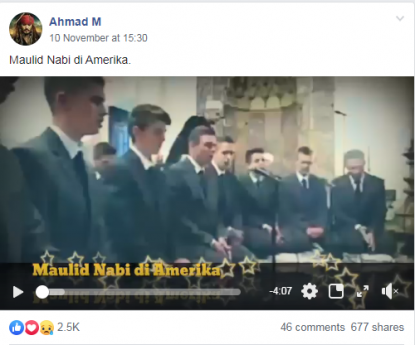 “Maulid” is the Indonesian-language word for Mawlid, which means the birthday of a holy figure in Islam, especially the Prophet Muhammad.

A shorter version of the video has appeared on Facebook alongside a similar claim since 2016 here and here, where it has been viewed more than 2,400 times.

The claim is false; the video shows a celebration of the birthday of the Prophet Muhammad in Bosnia and Herzegovina in 2014.

“Nasheed” is Islamic songs or chants. “Taleal bedru aleyna” is an Islamic traditional song which reportedly recited by the inhabitans of Medina upon the Prophet Muhammad’s arrival.

According to the Bosnian-language caption of the video, Mirza Ganic is the soloist in the performance.

The video was published on the YouTube channel for 'Mirza EMirzade Ganić', who describes himself as “the muezzin of the Gazi Husrev-beg mosque”.

The Gazhi Husrev-Beg Mosque is located in Sarajevo, the capital city of Bosnia and Herzegovina.

Below is a screenshot comparison between the clip in the misleading post (L) and the original video (R):

Below is a screenshot comparison between the original video (L) and the photo of the mosque’s main hall from the mosque’s official website (R). AFP has circled prominent features in red.

Ganic told AFP by Facebook Messenger on November 14, 2019: “The video was taken in year 2014. It was a Mawlid an-Nabawi event; the birthday of Prophet Muhammed SAWS in Sarajevo.”