An image that shows a man with wounds on his back has been shared in multiple Indonesian-language posts on Facebook and on blogs that claim he died after his phone exploded. The claim is false; the image has previously circulated in Indian media reports about clashes between Sikh protesters and police in Punjab state in October 2015.

The photo was published in this Facebook post on November 9, 2019. It has been shared dozens of times.

Below is a screenshot of one of the misleading post: 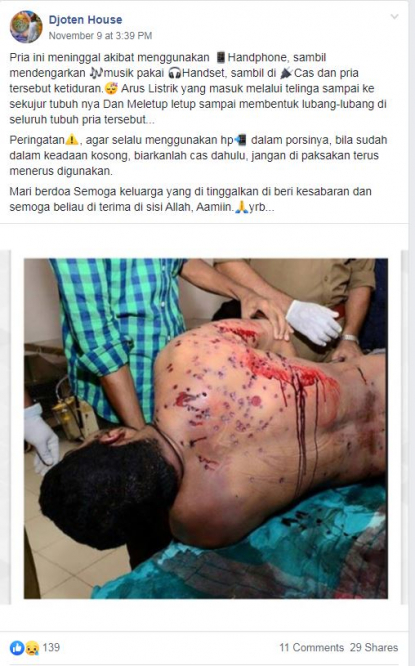 The post’s Indonesian-language caption translates to English as: “This man died because he used his mobile phone to listen to music with a headset, while the phone was charging and the man fell asleep. Electric current that entered his body through his ears exploded and left holes all over the man’s body…

“Beware, to always use mobile phone when needed, if it runs out of power, let it charge, do not insist to use it continuously.

“Let us pray may the families left behind were given the patience and may he be accepted by the side of God. Ameen…”

The same image was also published on Facebook here, here and here alongside a similar claim.

The same image, alongside a similar claim, was also shared in multiple blog posts with the same claim, for example here, here and here.

The claim is false; the photo has circulated in Indian media reports about clashes between Sikh protesters and police in Punjab state in October 2015.

Below is a screenshot of the report published by Khalsa Force: 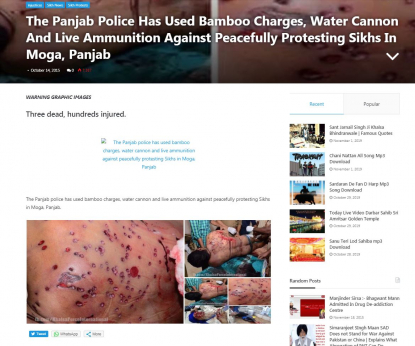 Screenshot of the Khalsa Force report

Moga is a city located in India’s northern state of Punjab, also known as Panjab.

Keyword searches on Google found the image was also published here on the Twitter account for SikhPressAssociation, a UK-based news outlet focusing on Sikh news, on October 14, 2015.

The Twitter post's caption states: “Sikhs are less than 2% of India. Another minority being subjected to police brutality. RT #SikhLivesMatter”.

Below is a screenshot comparison of the image in the misleading posts (L) and the image published on the Twitter account of SikhPressAssociation (R):

The photo also appeared in a report about the aftermath of the violence in Punjab, published by Indian news site Janta Ka Reporter on October 17, 2015.

Thousands of activists from various Sikh organizations protested against “an alleged incident of sacrilege” in various cities in Punjab on October 14, 2015, leading to clashes between protesters and police that caused two dead and 75 injured, according to this India Today news report published on the same day.