In the wake of the violent Israeli raids in Gaza, a spokesman for Israeli Prime Minister Benjamin Netanyahu shared a video clip on May 11, 2021 alongside a claim it shows Hamas intentionally launching rockets at residential neighborhoods in the Gaza Strip. The claim is false: the video has circulated online in various contexts since at least 2018.

Ofir Gendelman, a spokesman for Netanyahu to the Arab media, published the video on his Facebook and Twitter accounts on May 11, 2021.

His Arabic-language comment in the post's caption translates to English as: "Here is conclusive evidence, the terrorist Hamas militia continues to intentionally fire rockets inside residential neighborhoods in the Gaza Strip. This is a war crime." 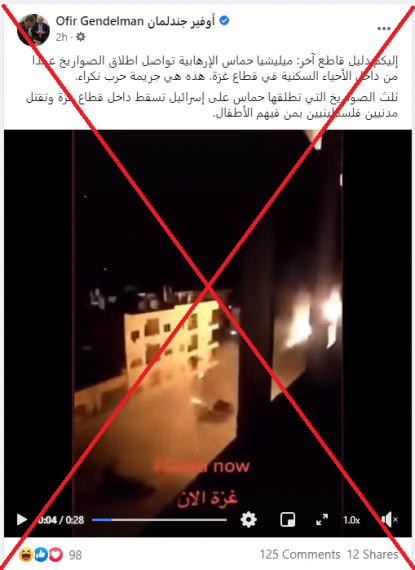 The Israeli official shared these posts a day after 26 Palestinians were killed in an Israeli bombardment of the besieged Gaza Strip in response to the launching of rockets towards Israel, Arab News reported here.

This escalation came as a result of continuous confrontations for about two weeks in occupied East Jerusalem between Palestinians and the Israeli security forces.

It followed Palestinian protests against a judicial decision to evacuate four homes inhabited by Palestinian families in the Sheikh Jarrah neighborhood for the benefit of settlers.

The confrontations expanded to the Al-Aqsa Mosque in the Old City of Jerusalem, which is the third holiest site in Islam. AFP reported on the crisis here.

The video was also shared in Chinese and English languages alongside similar claims about the recent confrontations.

The claim, however, is false. The video that Ophir Gendelman shared has circulated online in various contexts since at least 2018.

Reverse image searches for keyframes extracted from the video found it was published in various contexts years ago, including a post which states it was filmed in Iraq in 2020.

Further research found this older version of the clip published on YouTube in 2019.

It is described as filmed in the Syrian city of Maarat al-Numan. The caption states the video shows rockets fired by opposition factions towards the Syrian regime forces.

Another version of the video was shared in 2018. The caption states it was filmed in Daraa in southern Syria.

Although it is not clear when and where exactly the original video was taken, it can be traced back to at least June 2018 -- almost three years before the latest Israel-Hamas conflict.