Skip to main content
Activists of the Aurat March celebrate as they gather during a rally to mark International Women's Day in Karachi on March 8, 2021. (Photo by Asif HASSAN / AFP)

Facebook and Twitter posts share a video they claim shows women chanting blasphemous slogans during the women’s day march in Pakistan in March 2021. The claim, however, is false: the misleading video clip has been inaccurately subtitled; in the original footage published by the event's official organisers, no blasphemous slogans were chanted.

The footage shows dozens of women chanting during a women’s day march in the Pakistani city of Karachi. The clip includes superimposed Urdu subtitles that translate as:

The Facebook post’s Urdu-language caption translates as: “Insult of Allah and Prophet (Mohammad) in the name of women's march. Just check the slogans. Where is the state and law? Is this allowed openly on roads? Non-Muslims do not insult so much.” 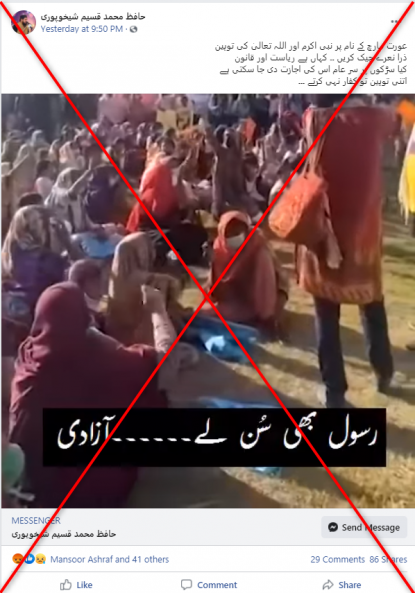 The post circulated just days after women rallied across Pakistan to mark International Women’s Day on March 8, 2021. The women’s march, officially known as Aurat March in Urdu, was reported on by Dawn newspaper here and The News International here.

The original footage was published by Aurat March organisers on Twitter here on March 11, 2021.

A review of the footage shows that the subtitles added to the misleading version of the video are not an accurate translation of the chants.

One of the alleged chants — “Iqbal should also listen, freedom” — is a reference to Muhamad Iqbal, a poet, philosopher and major Pakistani independence figure.

In reality, the women were chanting “Ismail should also listen, freedom” — a reference to Imran Ismail, the leader of the ruling Tehreek-e-Insaf party and the governor of Pakistani province of Sindh.

At no point are any chants invoking Allah or the Prophet Mohammad heard during the original footage. 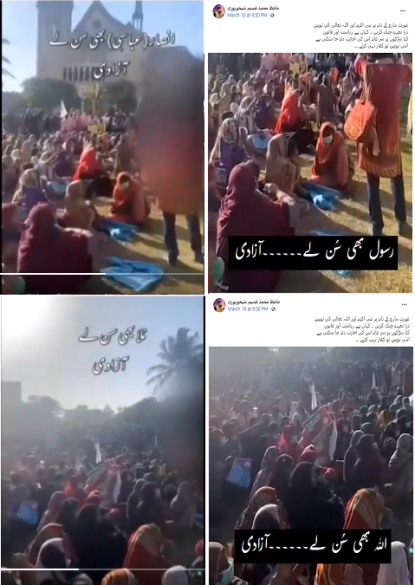 The Aurat March tweet that featured the original footage also condemned the spread of the false claims about the women’s chants. 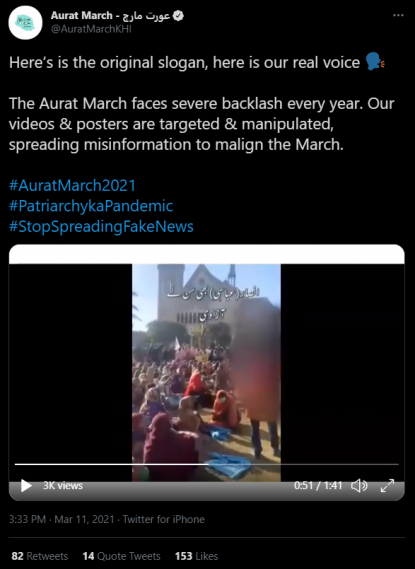 AFP has fact checked several other false claims about the women’s march in Pakistan; for instance here and here.