A photo of Prakash Kaur, the younger sister of Indian revolutionary Bhagat Singh, been shared in multiple Facebook and Twitter posts alongside a claim that Kaur died in March 2021. The claim is false; Kaur in fact died in September 2014 in Canada.

The post’s Hindi caption translates to English as: “Bhagat Singh's 96-year-old younger sister Prakash Kaur left us today, but no politicians expressed condolences. Let us pay our tribute to the sister of the freedom fighter.” 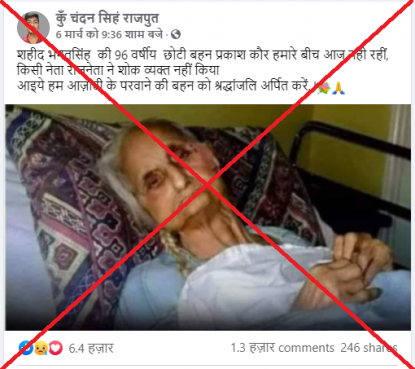 Bhagat Singh was an Indian revolutionary who was hanged at the age of 23 for the murder of a British official in 1931.

The post circulated as Singh's relatives expressed support for the ongoing farmers' protests, as The Times of India reported here.

A keyword search led to this Times of India report about Kaur’s death in Canada on September 29, 2014.

“Parkash Kaur, the only surviving sibling of martyr Bhagat Singh, has passed away in Brampton, Canada. Coincidently, as per Canadian time, she died on September 28, which was observed as 107th birth anniversary of Bhagat Singh. Prakash Kaur (93) was settled in Canada since 1980 and was residing there with her elder son Rupinder Singh Malhi. She was paralysed and bed ridden since the past around six years,” the report reads.

Capt. Amarinder Singh -- an Indian National Congress party politician and the current chief minister of Punjab -- took to Twitter to express his condolences on September 30, 2014.

I express grief & sorrow at the death of Bibi Prakash Kaur, sister of Shaheed #BhagatSingh. I also pay profound homage to the departed soul.

Kaur's death was also widely reported in Indian media in 2014; for example here by The Indian Express, here by Indian Today and here by the Hindustan Times.

A reverse image search on Google found that the photo shared in the misleading posts is in fact Kaur. The photo was published in a blog here on September 28, 2013.