A video has been viewed thousands of times on Facebook alongside a claim it shows Indonesian President Joko Widodo announcing plans to shut down liquor factories. The claim is misleading; the video shows the Indonesian president talking about revoking a presidential decree that allowed new investments in the alcoholic beverage industry; Indonesia still allows the production and sale of alcoholic drinks. 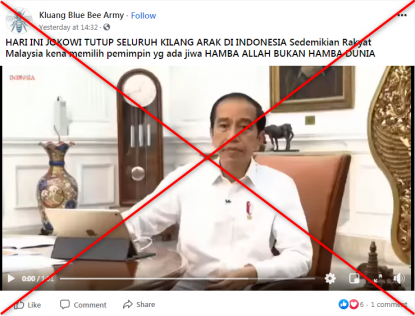 Translated from Malaysian, the text reads: “TODAY JOKOWI SHUTS DOWN ALL LIQUOR FACTORIES IN INDONESIA.

“Therefore, Malaysian people should choose a leader with spirit as THE SERVANT OF ALLAH NOT THE EARTHLY SERVANT.”

“Jokowi” is the popular nickname of Indonesian President Joko Widodo.

A reverse image search, followed by a keyword search, found this video posted on the Indonesian Cabinet Secretary’s official YouTube channel on March 2, 2021.

The part of the footage seen in the misleading posts starts from the official video's 30-second mark.

“After receiving input from Muslim clerics, from the Indonesian Ulema Council (MUI), Nahdlatul Ulama (NU) Muhammadiyah and other mass organisations, and other religious figures, I hereby declare that the presidential regulation pertaining to opening new investments in the industry of alcoholic beverages revoked,” Jokowi said.

Nowhere in the two-minute video does he mention shutting down liquor factories.

Indonesian media, such as Kompas.com and CNN Indonesia, have also reported Jokowi’s decision on the presidential decree that was issued in early February 2021.

“The claim that Mr President Joko Widodo has closed all alcoholic drink industry in Indonesia is not true,” Edy Sutopo, director of beverage, tobacco and freshener industries at Indonesia’s Industry Ministry, told AFP via WhatsApp on March 12, 2021.

Indonesia has not banned alcoholic drinks, except in Aceh, the only province that adopts Sharia.

The country’s alcohol prohibition bill, which has been discussed in parliament for years, is largely supported by Islamic-based parties, but it is opposed by Jokowi’s party, the Indonesian Democratic Party of Struggle, and Golkar Party.