As violence escalated in Gaza in May 2021, multiple online posts shared a video that they claimed shows Palestinians staging a fake funeral in Gaza in a bid to gain world sympathy. The claim is false: the video has circulated online since March 2020 in unrelated posts about a Covid-19 lockdown stunt in Jordan.

It shows a group of people carrying what appears to be a shrouded body on a stretcher along a street.

The group drops the stretcher and disperses suddenly as they hear sirens approaching. The person who had been lying on the stretcher then gets up and walks away.

The video’s caption reads: “Today in Gaza, the Palestinians pretended to be at a funeral and photographed it so that they would feel sorry for them. But then an alarm sounded ... oops #israel #IsraelUnderFire #IsraelUnderAttack.” 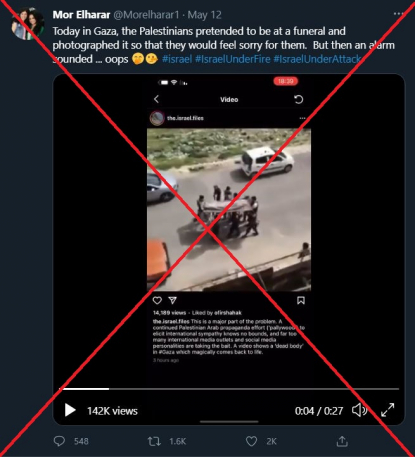 The misleading post circulated online as violence escalated in Gaza in May 2021. AFP reported on the conflict here.

Israel's air force said it had launched multiple strikes, targeting what it described as locations linked to the "counterintelligence infrastructure" of Hamas, the Islamist group that controls Gaza.

In Gaza, dozens were killed and hundreds injured after days of near relentless Israeli air strikes.

The same video was also shared alongside a similar claim here on Twitter, and here and here on Facebook.

An identical video was also shared here on Instagram; and here and here on Twitter alongside a claim it was filmed in India as Covid-19 infections surged in 2021.

These claims are false: the video predates the violence in Gaza in May 2021.

A reverse image search on Google found an identical video published here on YouTube on March 24, 2020.

The video’s Arabic-language title translates in part as: “Fake funeral in Jordan”.

An Arabic-speaking journalist at AFP analysed the video. Laughter could be heard at the beginning of the clip, suggesting the situation was not a serious one.

Below is a screenshot comparison between the video in the misleading posts (L) and the YouTube video published in March 2020 (R):

The incident was also reported by the UAE-based news organisation Al Roeya here on March 24, 2020.

The report said the video shows a group of young people who were trying to break a lockdown imposed to curb cases of Covid-19.