A video has been viewed hundreds of thousands of times on Facebook, Twitter and YouTube alongside a claim that it shows a drone launching fireworks at people who breached a curfew in Malaysia during a nationwide coronavirus lockdown. The claim is false; the video's audio has been manipulated to include a man speaking in Malaysian; the original clip actually shows a prank that was staged by a Brazilian influencer in Brazil in July 2019.

The post's Indonesian-language caption translates to English as: “In Kuala Lumpur those who go outside of their house were shot by fireworks launched by a drone.

"It seems our Indonesian people have to be bombed by nuclear weapons first to make it works.” 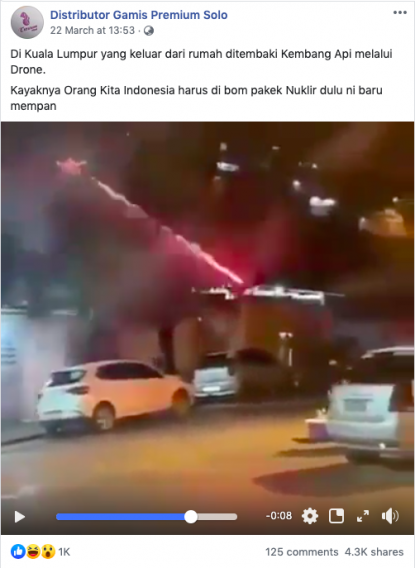 A voice of a man speaking Malaysian can also be heard, saying: "Stay inside the house, don't go out!"

Malaysia started to impose a partial nationwide lockdown from March 18, 2020, until at least April 14, 2020, shutting almost all businesses and banning its citizens from travelling abroad, in a bid to stem the soaring number of novel coronavirus cases.

The claim is false; the original clip actually shows a prank that was staged in Brazil in July 2019 – months before COVID 19 was first detected in the Chinese city of Wuhan in December 2019.

The video’s Portuguese-language caption translates to English as: “My friends had a barbecue on the street and didn’t invite me, look what I did to them lol Trolled them out of nowhere. Next week there’s ‘guerra dos bruxos???’”

Albert’s Instagram video has a different soundtrack that does not feature anyone speaking Malaysian.

Below is a screenshot comparison of the video in the misleading posts (L) and Albert’s Instagram video (R):

“Mr Albert, who has two million followers on Instagram, told the BBC the video is not real, and explained he planned the stunt with friends.

“‘Many people know me,’ he said, ‘and know that I edit all the videos that I post.’”

The Portuguese-language tweet translates to English as: “They took my video trolling my friends, threw it on a sensationalist newspaper website saying that it was a neighbor angry with the noise in Sao Paulo that fired bombs lol Dude, how far can these fake news go?”

His Instagram story was included in this video by Brazilian newspaper Jornal de Brasilia on July 15, 2019.

In 2019, AFP debunked the same video with a different claim in English here and in Portuguese here.