A video has been viewed millions of times in multiple posts on Facebook, Twitter and YouTube which claim it shows a drone launching fireworks at a home during a neighbourhood dispute over a loud party. The claim is false; the video actually shows a stunt staged by a Brazilian influencer with his friends in Brazil.

The video was published in this Facebook post on July 16, 2019. It has been viewed more than eight million times and shared more than 140,000 times.

The 33-second video shows an airborne drone launching fireworks at a narrow street, while onlookers duck for cover.

The post's caption states: “Whoah! Guy Gets Annoyed At His Neighbor's Loud Party, Attacks It With A Fireworks Drone”. 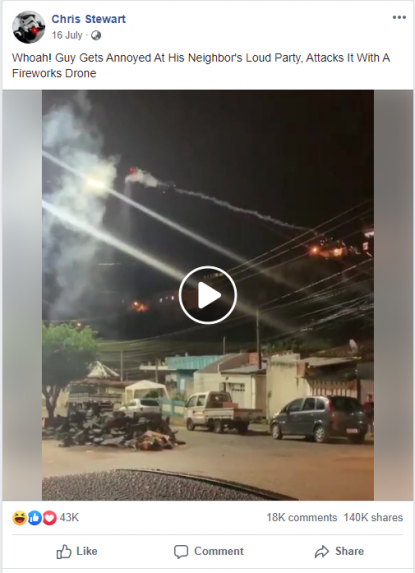 The claim is false; the video shows a stunt designed by Brazilian influencer Lucas Albert with his friends in Brazil.

A keyword search found that Albert, who has more than two million followers on Instagram, published the same video to the social networking site here on July 14, 2019. The post is embedded below.

The Portuguese-language caption translates to English as: “My friends had a barbecue on the street and didn’t invite me, look what I did to them lol Trolled them out of nowhere. Next week there’s ‘guerra dos bruxos???"

The video has since been shared widely in a misleading context, prompting Albert to issue a clarification on Twitter and Instagram Stories.

Translated from Portuguese to English, his tweet reads: “They took my video trolling my friends, threw it on a sensationalist newspaper website saying that it was a neighbor angry with the noise in Sao Paulo that fired bombs lol Dude, how far can these fake news go?”

Albert made a similar statement in an Instagram Story, which was included in this July 15 news report by Brazilian newspaper Jornal de Brasilia.

This video was also debunked by AFP Brazil here.