A photo of a man and woman embracing has been shared hundreds of times on Facebook and Twitter alongside a claim that it shows two Italian doctors who died of a novel coronavirus, COVID-19, after contracting the disease from the patients they treated. The claim is false; this is an Associated Press photo of a couple kissing at an airport in Barcelona, Spain. 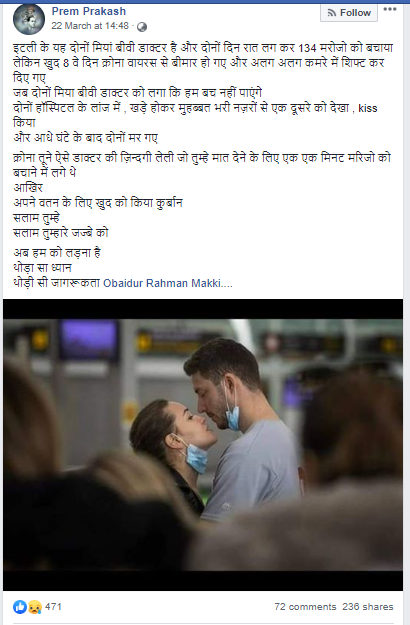 The Hindi-language caption translates to English as: “They are Italian husband and wife who worked day and night and saved the lives of 134 patients. But they themselves contracted the corona virus and fell sick on the eighth day and moved to separate rooms. However, they met in the hospital lounge and kissed when they realized that they could not be saved, and died after half an hour.

“Corona, you killed the doctors who spent every minute saving people and sacrificed lives for their country at the end. Salute to their passion. Now we have to fight with care and awareness.”

A Google reverse image search found that the original photo was published by the Associated Press (AP) on March 12, 2020 on the AP Images website here.

Below is a screenshot of the photo on the AP Images website: 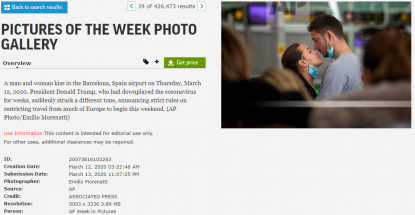 The photo description reads: “A man and woman kiss in the Barcelona, Spain airport on Thursday, March 12, 2020. President Donald Trump, who had downplayed the coronavirus for weeks, suddenly struck a different tone, announcing strict rules on restricting travel from much of Europe to begin this weekend. (AP Photo/Emilio Morenatti).”

AFP found the photo was also published by many international media in March 2020, including The Chicago Tribune here, the Miami Herald here and The State here, all describing the photo to have been taken at the airport in Spain.