A screenshot of a World Health Organization (WHO) webpage has been shared in multiple posts on Facebook, Twitter and messaging app Line alongside a claim it shows international health authorities raised Thailand’s pandemic stage to a "level 4" during the novel coronavirus crisis. The claim is false; the screenshot in fact shows a WHO document that categorised Thailand as "level 4" in terms of "preparedness and response readiness" for the novel coronavirus, COVID-19; the Thai government has its own classification system for domestic pandemics, the highest of which is “phase 3". 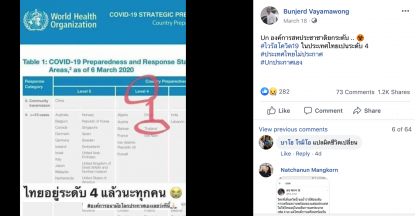 The Thai-language caption translates to English as: “The United Nations has raised… ☣#COVID19 Thailand to level 4 #Thailandhasntannounced #UNannounceditthemselves”.

The post’s hashtags suggest that the United Nations (UN), which established the WHO as a UN specialised agency, that increased Thailand’s pandemic level during the coronavirus crisis.

As of March 30, Thailand had 1,524 confirmed cases of COVID-19 and nine deaths, the Thai Ministry of Public Health reported here.

Comments by some Facebook users on the misleading post indicated they believed Thailand's pandemic level had increased to a level higher than had been stated by the Thai government.

Their comments translate to English as “Yesterday who said we were in phase 2”; “Are you ashamed?”; and “Leader will lead us to pray”.

Below are screenshots of some of the users’ comments:

Screenshots of the users’ comments

The screenshot and claim were also shared on Facebook here, here, and here; and on Twitter here, here, here and here.

The screenshot was taken from this WHO “Preparedness and Response Status for Countries, Territories, and Areas” report published on March 6, 2020.

The WHO said the agency’s "preparedness and response" categories differ from a country's domestic pandemic classifications.

“The WHO doesn’t announce the pandemic stage. That is categorised by Thailand’s Department of Disease Control, Ministry of health,” WHO spokeswoman Kanpirom Wiboonpanich told AFP by phone on March 24, 2020.

Below is a comparison of the screenshot in the misleading posts (L) and the document from the WHO’s website (R) with similarities circled by AFP: 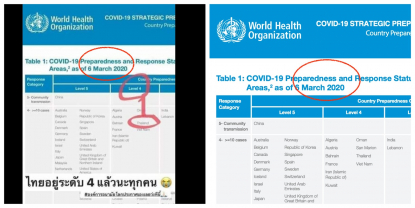 The Thai Ministry of Public Health also said the government’s highest stage of pandemic phases is a phase 3. So far, however, only certain parts of Thailand have been classified as phase 2 due to COVID-19.

“We are in pandemic phase 2 in some areas of Thailand,” Dr. Tanarak Plipat, the ministry’s Deputy Director-General of the Disease Control Department, told AFP by phone on March 26, 2020. “It’s not fair if we call the whole country phase 2, because there are some provinces that have not been detected positive for COVID-19 like Mae Hong Son,”

Plipat added that the government’s “aim for classifying areas of Thailand into different pandemic stages is for us to know what actions we need to take in order to handle the situation.”