A video of flames rising from the surface of a large body of water has been shared hundreds of times on Facebook alongside claims that it shows an underwater volcanic eruption in Lake Kivu. This is false: the video was filmed in Nigeria. Experts and locals told AFP the fire was likely caused by a leak in underwater petrol-carrying pipelines.

The video shows fire spreading over the water, just a few metres from a beach. Thick plumes of black smoke rise in the sky, attracting a group of onlookers. Two men are heard speaking in Yoruba, one of Nigeria's main languages, about what they refer to as a “wonder”.

“I hear that fire burns on water but I have never seen it,” one man tells the other. “There is petrol there,” both say.

A Facebook post featuring the video claims the footage shows a volcanic eruption in Lake Kivu, which lies on the border between the Democratic Republic of Congo (DRC) and Rwanda in Eastern Africa.

The post’s caption goes on to state: “Goma and nearby cities threatened with evacuation as volcano erupts.”

Goma is the capital of North Kivu province in eastern DRC. A screenshot taken on June 4, 2021 showing one of the false posts

The same video has been shared here and here with similar claims. Another post made the same claim before editing the caption to ask “where is this.”

The same video was also shared in French-language Facebook posts with the claim that it showed an underwater volcano in Cameroon. AFP Fact Check debunked the story here.

A mysterious fire on a beach in Nigeria

A reverse image search from screenshots taken from the video reveals the footage was shared by several Nigerian news sites including Globalnewsng, Lindaikeji, and KanyiDaily. It was also published on the YouTube channel of The Punch, one of Nigeria’s most widely-read newspapers. According to these outlets, the video was taken at Ilashe Beach, in Lagos State, southwest Nigeria.

Some comments below the video also suggest that the video was shot on "a beach in Badagry in the state of Lagos in Nigeria" rather than in Lake Kivu. One user points out that the people in the video speak Yoruba, a language mostly spoken in southwest Nigeria. 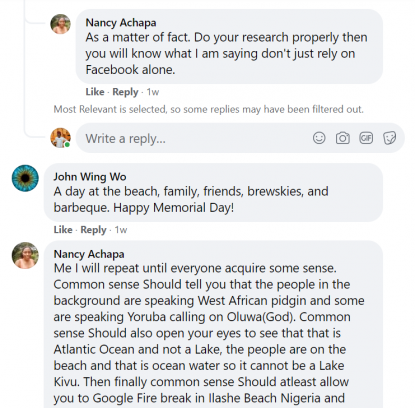 While a volcanic eruption did recently take place near Goma (as reported here by AFP), the volcano in question, called Nyiragongo, erupted aboveground, not underwater. Magma was detected flowing under Goma as well as underneath Lake Kivu, forcing many residents to evacuate. However, no eruptions were recorded on the lake.

In addition, three volcanologists and a geophysics expert ruled out the possibility of the Facebook video showing an underwater volcanic eruption. Instead, they pointed to a petrol fire, basing their theory on three observations.

For one, there is the colour of the smoke.

"An eruption at this location [on the surface of a body of water] would cause explosions due to contact between the lava (1,200°C) and a small layer of water (20 to 30°C) which would instantly turn into steam,” Benoît Smets, a volcanologist at the Royal Museum for Central Africa in Tervuren, Belgium, told AFP. In this case, "the smoke should be whitish, at least in part," he explained.

Similarly, Mathilde Adelinet, a professor and researcher in geophysics, said  "an underwater volcano would instead evaporate the seawater with possibly little ash, therefore it would emit rather whitish or gray smoke".

Corentin Caudron, a researcher at the French National Research Institute for Sustainable Development (IRD), also said the video did not look the result of volcanic activity.

In the case of an eruption, "you have volcanic material, ash coming out, [and] it rises much higher in altitude in general" than what is seen in the clip, he said - as can be seen in this video by Getty Images showing a series of underwater volcanic eruptions.

The second clue is linked to the lack of a blast.

"The absence of any explosion (even small)" proves "that it is fuel burning on the surface of the water, or in shallow waters,” said Roberto Sulpizio, professor at the Department of Geo-environment and Earth Sciences at the University of Bari Aldo Moro in Italy and secretary-general of the  International Association of Volcanology and Chemistry of the Earth's Interior (IAVCEI).

The third element ruling out the possibility of a volcanic eruption is the size and appearance of the fire. The "source of the fire is too small," Belgian volcanologist Smets said. “The way in which the flames are visible on the surface of the water are typical of a fuel that is lighter than the water”.

Patrick Allard, a researcher at the Paris Globe Institute of Physics  and president of the IAVCEI, said the viral video most likely showed "oil or dense gasoline burning" -- not a volcanic eruption.