Skip to main content
Canadian Prime Minister Justin Trudeau attends a Special Committee on the Covid-19 pandemic in the House of Commons on Parliament Hill on May 13, 2020 in Ottawa, Canada (AFP / Dave Chan)

Canadian polls not on hold ‘indefinitely’ due to Covid-19

Social media posts claim that the Canadian Parliament voted to suspend elections “indefinitely,” in a power grab because of the pandemic. This is false; Canada’s constitution requires a federal election to be held every five years, political scientists expect Prime Minister Justin Trudeau to call one in late 2021, and the claim rests upon a non-binding House of Commons vote which said holding a ballot during the coronavirus emergency would be “irresponsible.”

“The ENTIRE federal government, including our ‘conservative’ members...voted to suspend elections indefinitely” until ‘after the pandemic,” claims a June 3, 2021 Facebook post. It added that they “essentially unanimouly (sic) voted themselves dictators.” 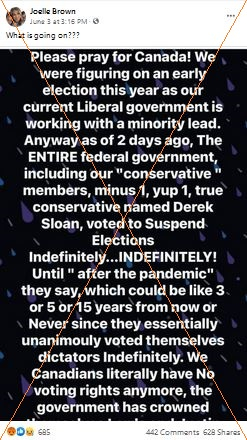 However, the Canadian Charter of Rights and Freedoms prohibits any House of Commons from continuing beyond five years without a general election, making an indefinite delay in elections contrary to democratic rights enshrined in the Constitution.

A statute also says: “Each general election must be held on the third Monday of October in the fourth calendar year following polling day for the last general election,” which means that the next one should take place on October 16, 2023.

Prime Minister Justin Trudeau’s Liberal Party was elected for a second term in October 2019, but as a minority government relying on the backing of opposition parties.

Nelson Wiseman, professor of political science at the University of Toronto, called the claim that a federal ballot was put on hold indefinitely “ridiculous and not factual.”

The claim is based on the Canadian Parliament’s May 25, 2021 vote on a Bloc Québécois motion, which said: “In the opinion of the House, holding an election during a pandemic would be irresponsible, and that it is the responsibility of the government to make every effort to ensure that voters are not called to the polls as long as this pandemic continues.”

All but one legislator voted in favor of the motion, which passed with 327 votes.

Around 1.4 million cases of Covid-19 have been recorded in Canada, and as recently as April 2021 the country’s largest province, Ontario, was battling a worrying spike in infections. More than 25,700 people in Canada have died from the disease.

According to Wiseman: “The motion is not binding,” and MPs knew that.

“They voted for the motion when the pandemic was still raging and the public was not in the mood for an election.”

That’s still the case, Wiseman said, but the Liberals seem determined to hold a vote, “probably in October, unless they see their numbers drop in the polls.”

Richard Johnston, professor emeritus of political science at the University of British Columbia, agreed, calling the motion “a gimmick.”

“None of the opposition parties wants an election right now, either because the polls do not seem favorable or their organizations (and budgets) are not ready yet. They fear that the (Liberal) government will ask to dissolve Parliament, as its position in the polls seems relatively favorable, for reasons related to Covid,’’ he told AFP.

In late May, polling found that Trudeau’s Liberals are favored to win with more than 35 percent of the votes, while the Conservative Party, the main opposition caucus, would capture just under 30 percent.

Jon Pammett, professor of political science at Carleton University, said that because of the Trudeau government’s minority position, rumors spread that the Liberals would engineer their own defeat in a vote of confidence in order to hold an election to regain the majority.

“All the opposition parties felt themselves in a disadvantageous position at that time, and submitted a ‘sense of the house’ motion that this not happen till the pandemic was over. Although this motion was put by the Bloc Québécois, the Conservatives were probably most vulnerable, and thus supported it wholeheartedly.”

“Everybody here expects an election this fall, when the pandemic will be ‘over,’” he added.

Anna Esselment, associate professor of political science at the University of Waterloo, said that at any point, the prime minister can ask the governor general to dissolve the parliament and call an election. Likewise, in the case of a minority government such as Trudeau’s, the opposition parties can band together and vote non-confidence in the government to make way for elections.

Elections Canada, the independent agency responsible for organizing the federal election, says that a snap ballot could happen “at any time.” It lists several measures being implemented for a possible vote to be safely held during the pandemic. 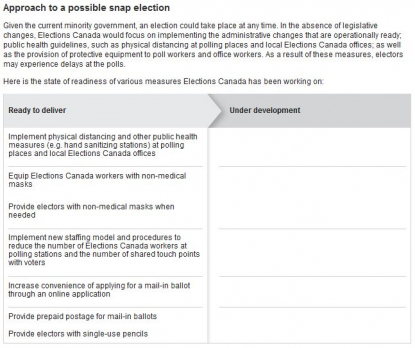 Screenshot taken from elections.ca on June 9, 2021

Elections have been postponed in many countries due to the Covid-19 pandemic.