A video has been viewed more than one million times in multiple Facebook and YouTube posts alongside a claim it shows Turkey and “Arab [countries]” are “ready to crush France” after French President Emmanuel Macron “insulted Islam”. The claim is false; the two Indonesian news reports quoted in the video and the original clips do not state Turkey or any Arab countries plan to “crush France”; as of November 20, 2020, there have been no credible reports about such plans.

The post’s Indonesian-language caption translates to English as: “LATEST NEWS ~ TURKEY AND ARAB ARE READY TO CRUSH FRANCE…

“LATEST NEWS ~ TURKEY AND ARAB ARE READY TO CRUSH FRANCE, WHICH HAS INSULTED ISLAM ~ THE LATEST MILITARY NEWS TODAY”.

The video previously appeared alongside a similar claim on YouTube here, where it has been viewed more than 160,000 times.

The thumbnail of both posts shows the images of Turkish President Recep Tayyip Erdogan and his French counterpart Emmanuel Macron. The Indonesian-language text translates to English as: “FRANCE HAS DIVIDED THE WORLD. ARAB AND TURKEY ARE READY TO CRUSH FRANCE, WHICH HAS INSULTED ISLAM”.

Erdogan has joined calls in the Islamic world to boycott French products after Macron defended the right to publish cartoons depicting the Prophet Mohammmed. The French president made the comments following the murder of a French schoolteacher who had shown his class cartoons of the Prophet, AFP reported here.

A Google search of keywords heard in the video found the voiceover in the footage read paragraphs from two Indonesian-language news reports.

From the video's five-second mark to 12-second mark, and from its one-minute two-second mark to its five-minute 29-second mark, the voiceover reads the headline and whole paragraphs from this CNBC Indonesia report published on October 27, 2020. It is headlined: “The world is divided after Macron insulted Islam: Arab-Erdogan vs Europe.”

From the five-minute 30-second mark until the end of the clip, the voiceover reads this whole report from Indonesian news outlet Sindonews. Published on October 21, 2020, the report is headlined: “Erdogan calls Macron’s initiative to reform Islamic institution an effort to attack Muslim.”

Neither of the two news reports claim “Turkey and Arab are ready to flatten France.”

The footage shows shots taken from this live-streamed YouTube video by Anadolu Agency, on October 26, 2020, during which Erdogan addressed the audience about things related to Macron’s defence of the Prophet Mohammed cartoons.

The YouTube video’s Turkish-language headline translates to English as: “President Erdogan: I am calling on my people: Never buy French-labelled products."

Below are screenshot comparisons of the video in the misleading post (L) and the Anadolu video (R): 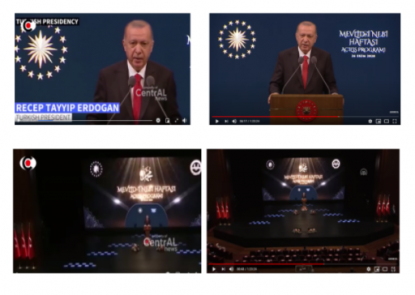 It also shows shots from Erdogan’s Justice and Development Party (AKP) congress in the Turkish city of Malatya on October 25, 2020, taken from this live-streamed video on the president’s YouTube channel. It is headlined: “Our AKP party provincial party congress in Malatya.”

Below is a screenshot comparison of the video in the misleading post (L) and the video on Erdogan’s YouTube channel (R):

A Turkish-speaking journalist at AFP’s Istanbul bureau analysed the two videos and concluded there is neither a statement from Erdogan about Turkey was “ready to crush France”, nor any remarks that could be interpreted as such.

Apart from Macron and Erdogan, the video does not mention or show any clips of other political leaders.