Skip to main content
Supporters of Vice-President Leni Robredo hold a rally in front of the Supreme court in Manila on October 15, 2019. (AFP / Ted Aljibe) 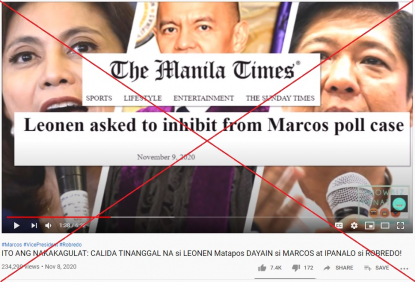 A screenshot of the misleading post, taken on November 11, 2020

The video’s Tagalog-language title translates to English as: "THIS IS SHOCKING: CALIDA HAS REMOVED LEONEN After DEFRAUDING MARCOS and LETTING ROBREDO WIN!"

An identical video was also shared alongside a similar claim here and here on Facebook; and in this blog post.

From the one-minute 39-second mark, the video shows this report published by Philippine newspaper The Manila Times, which does not state Leonen has been removed from participating in the poll case.

The report, dated November 9, 2020, reads in part: “The Solicitor General and former senator Ferdinand Marcos Jr. will join forces on Monday in asking the Supreme Court, sitting as the Presidential Electoral Tribunal, to bar Justice Marvic Mario Victor Leonen from participating in deliberations on the election protest filed by Marcos.

“According to well-placed sources of The Manila Times, Solicitor General Jose Calida and Marcos will file a motion compelling Leonen to inhibit from the case.

“Leonen is the ponente for the case.”

On November 17, 2020, the Supreme Court announced it decided to “deny” the motion that would have prevented Leonen from participating in the poll dispute case.

“1.) deny the Motions to Inhibit separately filed by Protestant Ferdinand “Bongbong” R. Marcos and the Solicitor General; and

“2.) direct the Solicitor General and Mr. Jomar Canlas, reporter of the Manila Times, to show cause why they should not be cited in contempt.”

The resolution can be challenged within 15 days.