Two photos have been shared repeatedly in multiple Facebook posts alongside a claim they show children who died in flash floods after Typhoon Vamco hit the Philippines 2020. The claim is false: the photos actually show the aftermath of tropical storm Washi in two southern Philippine cities in 2011. 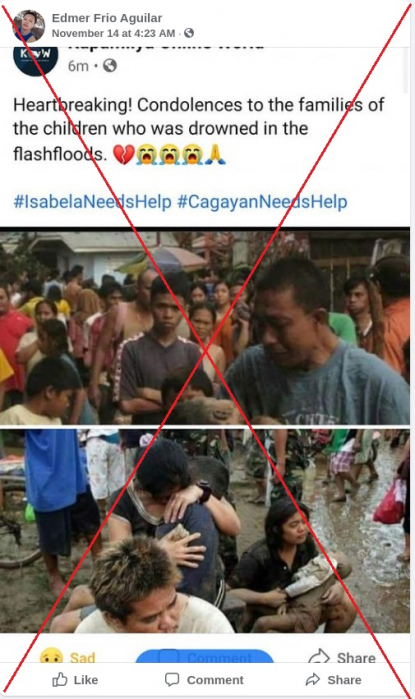 A screenshot of the misleading post, taken on November 18, 2020

The photos are captioned: "Heartbreaking! Condolences to the families of the children who was [sic] drowned in the flashfloods. #IsabelaNeedsHelp #CagayanNeedsHelp".

The post circulated online after Typhoon Vamco flooded parts of the main Philippine island of Luzon, including its northern provinces Isabela and Cagayan.

The same photos were shared alongside a similar claim on Facebook here, here, here and here.

The claim is false: both photos were taken in 2011, after tropical storm Washi hit the country’s southern island.

Reverse image and keyword searches on Google found the first photo in the misleading posts published in this December 17, 2011 report by Philippine media organisation GMA News.

The report reads in part: “A single viral photo has silenced any lingering doubts about the gravity of the disaster that Storm Sendong wrought and gave a heartbreaking face to the hundreds of victims of flash floods in northern Mindanao.

“At around 3:30pm —even as unverified damage reports continued to emerge on social media— blogger and Twitter user ‘Mindanaoan’ posted a TwitPic photo of an unidentified man in Consolacion, Cagayan de Oro, weeping as he clutched the muddied body of his drowned daughter to his chest.”

Storm Sendong is the Philippine name for Storm Washi, which caused floods that swept away whole villages in the southern Philippines in December 2011. The storm left more than 1,200 dead, mostly in the port cities of Cagayan de Oro and Iligan which bore the brunt of the disaster, AFP reported here.

Below is a screenshot comparison of the first photo in the misleading posts (L) and the photo in the GMA News report (R):

The photo also appears with the correct caption in this December 2011 post by the international nonprofit group Global Voices.

Reverse image and keyword searches on Google found the second photo in the misleading posts was taken by an AFP photographer, also after tropical storm Washi in 2011.

The photo can be viewed here on AFP’s website. It is captioned, in part: “Two women hold their children killed during the passage of tropical storm Washi at a village in Iligan City, on the southern island of Mindanao on December 17, 2011.”

Below is a screenshot comparison of the second photo in the misleading posts (L) and the AFP photo (R):

The same photo appeared in this slideshow on tropical storm Washi published by the US television network CBS News in December 2011.

The misleading posts were also debunked by Rappler here.