This video of a busy market during the pandemic was filmed in Pakistan, not India

As India’s coronavirus death toll soared, a video of shoppers at a packed market surfaced in Facebook posts alongside a claim it was filmed in Delhi. The claim is false: the video has circulated in news reports since April 2021 about a market in Lahore -- Pakistan's second-largest city -- where authorities have closed a string of shops for flouting coronavirus rules.

The caption appears to reference criticism of Indian Prime Minister Narendra Modi and politicians from his Bharatiya Janata Party, who organised huge rallies during April’s election in West Bengal.

Coronavirus cases and deaths shot up in the state after the poll. 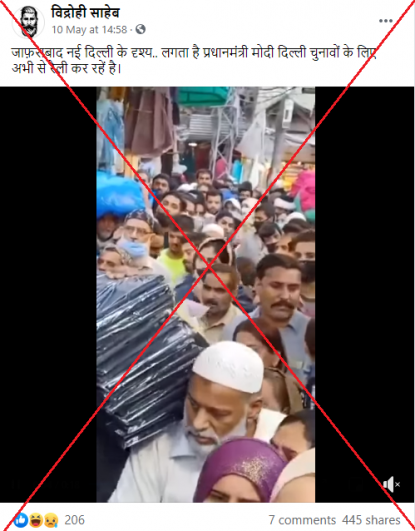 Many experts believe the official numbers of people dying in India --which has one of the world’s poorest-funded health care systems --underestimate the true death toll.

The video circulated widely on Facebook alongside a similar claim, including here, here and here.

The claim is false: the video does not show a market in Delhi.

Pakistani newspaper Dawn reported on April 28, 2021 that troops were patrolling Ichhra Bazar and other markets around the city to enforce social distancing and mask-wearing.

“A team entered Ichhra Bazaar and warned many people of action in case of not following the SOPs. Many people, while seeing the team, immediately started wearing masks,” Dawn quoted a bystander as saying.

Muhammad Ibrahim Arbab, the Assistant Commissioner for Model Town, Lahore, posted photos of a patrol at Ichhra Bazar on Facebook on April 27, 2021.

He said 15 shops were closed and several were warned about breaking coronavirus restrictions.

Visual clues in the footage show it was filmed in Pakistan.

Shops signs in the video are written in Urdu, including two signs outside clothing stores in the screenshot below. 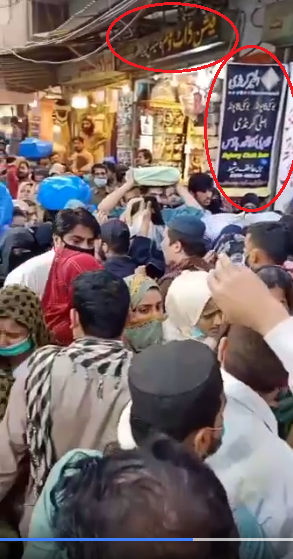 Screenshot of the footage with visual clues circled

AFP has previously debunked posts falsely claiming to show India during the pandemic here and here.