US not giving migrants long-term motel stays or bus vouchers

Facebook posts claim US President Joe Biden is giving undocumented immigrants free six-month motels stays and $1,100 of Greyhound bus vouchers. This is false; Immigration and Customs Enforcement said the stays arranged for migrants are generally short, while Greyhound said it had not provided vouchers to the government. 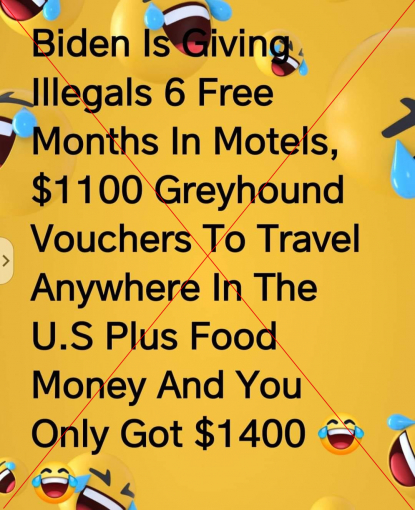 A screenshot of the visual used in the Facebook posts

The claim also circulated on Facebook here, here and here.

Biden, who has faced mounting criticism over his border policies during a surge in the number of people entering the United States from Mexico, has tasked Vice President Kamala Harris with working to address root causes of the increase.

The acting director of US Immigration and Customs Enforcement (ICE), director Tae Johnson, said in a March 2021 statement that the agency had signed an $86.9 million short-term contract with the non-profit division of Endeavors to provide temporary shelter for families placed in proceedings for removal from the country.

But the stays are not long-term, an ICE spokesperson told AFP by email.

“The contract with the non-profit provides for the acquisition of approximately 1,200 hotel beds and other necessary services in Texas and Arizona,” the spokesperson said. “Under the contract, shelter is intended to be short term, and generally less than 72 hours.”

Sarah Pierce, analyst at the Migration Policy Institute, said by email that such stays “tend to be used when the government is in a tight spot -- a very temporary measure.”

“Greyhound has not provided any vouchers to the government,” a spokesperson for the company said by email.

AFP Fact Check has debunked other inaccurate claims about the southern US border here.