Facebook posts circulating in Papua New Guinea in March 2021 share a screenshot of an Australian news report about the temporary suspension of the AstraZeneca coronavirus vaccine in Europe over blood clot concerns. The posts claim the vaccine is being "questioned" by Australian authorities. The posts have shared the news report in a misleading context: it shows an interview with Australian Environment Minister Sussan Ley on March 16, in which she said she had confidence in the AstraZeneca vaccine. Australian health authorities later recommended the jab only be given to people over the age of 50 after rare blood clot cases.

The screenshots were shared here on Facebook by a Papua New Guinea-based user on March 16, 2021. The post has been shared more than 380 times. 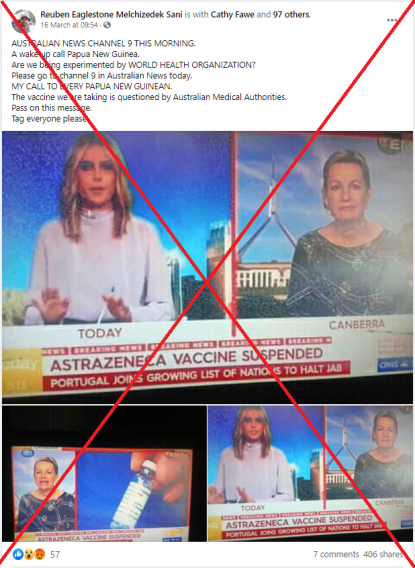 The post’s caption reads in part: “AUSTRALIAN NEWS CHANNEL 9 THIS MORNING. A wake up call Papua New Guinea. Are we being experimented by WORLD HEALTH ORGANIZATION? Please go to channel 9 in Australian News today. MY CALL TO EVERY PAPUA NEW GUINEAN. The vaccine we are taking is questioned by Australian Medical Authorities.”

The screenshots were shared alongside a similar claim on Facebook here and here.

The news report, however, has been shared in a misleading context.

The screenshots were taken from a segment on the Today Show, broadcast on the Australian-owned Nine Network.

Ley was briefly questioned about the suspension of the AstraZeneca in Europe. A full transcript of the interview can be seen on Ley’s official website here, showing she urged Australians to get vaccinated when they could.

In response to Langdon’s question on whether she still had “confidence” in the vaccine, Ley replied:

“Yes, I do Ally. We’re in good hands when you consider the checks and balances of the World Health Organization and here at home, the TGA [Therapeutic Goods Administration], we follow the health advice. We of course, tune into everything that is happening overseas but then we rely on that international and local expertise.

“So please feel confident in the vaccine. Please if you’re offered it, take it and remember that you’re helping many vulnerable people in the community if you are.”

Concerns that AstraZeneca's Covid-19 vaccine may cause blood clots led to some countries pausing its use in March 2021.

But after the vaccine was given the all-clear by the European Medicines Agency (EMA) and the WHO, some European countries announced they had begun using the jab again, AFP reported on March 19.

The AstraZeneca jab suffered a fresh blow when the EMA said on April 7 that blood clots should be listed as a "very rare" side effect of the shot.

The move prompted Australia and several other countries to recommend the jab only for younger people. Australian health authorities said on April 9 it should only be given to people over the age of 50.

The EMA and the WHO have stressed that the benefits of inoculation continue to outweigh the risks.

There has been one case of blood clotting in a patient who received the AstraZeneca vaccine in Australia, as of April 9.