A photo that shows stray dogs sitting on hospital beds has been shared in multiple Facebook posts that claim it was taken in a hospital in the southern Pakistani province of Sindh. The claim is false: the photo actually shows a hospital in India; the original image has been doctored to include the name of the Pakistani hospital and portraits of ruling party stalwarts.

The image of stray dogs sitting on hospital beds was shared in this Facebook post published on February 8, 2020.

The photo also includes “Jam Shoro Hospital” written on a notice board in the ward along with the photos of late Pakistani Prime Minister Zulfikar Ali Bhutto, former President Asif Ali Zardari and his son and Chairman of Pakistan People’s Party (PPP) Bilawal Bhutto Zardari. 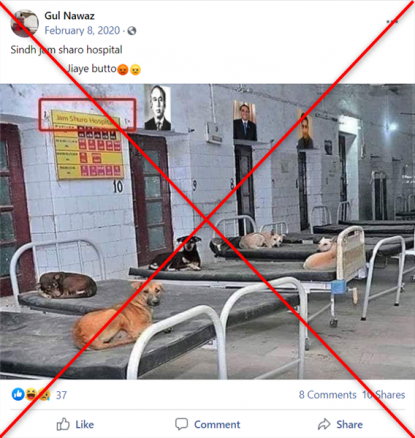 Jamshoro is a city in southern Pakistani province of Sindh which is ruled by the PPP.

The same photo along with similar claims has been shared here, here and here on Facebook.

However, the claim is false. The original photo is actually from the Sadar Hospital in Muzaffarpur city in the Indian state of Bihar. 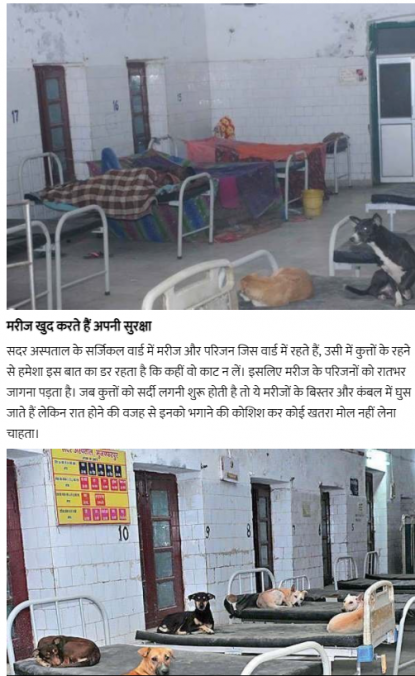 A screenshot taken on April 6, 2021 of Oneindia Hindi report

The Hindi-language headline translates to English as: “Bihar: 'Terrorist' dogs occupy beds in government hospital, patients live in fear”. The article reads in part: “Muzaffarpur. There have been reports and photos of the condition of the state hospitals in Bihar. A similar picture has emerged from Muzaffarpur in which stray dogs are seen resting on the beds of Sadar Hospital. Many stray dogs are encamped on the beds of government hospitals. You can see in the picture that beds of patients are also situated in this ward.”

Daily India Today also published a photo of the same hospital from a different angle in an online report on December 5, 2017 here.

“In yet another display of complete breakdown of the health machinery in Bihar, several dogs were found to be sleeping on the beds alongside patients inside the surgical ward of a Muzaffarpur government hospital,” the report said.

Below is a screenshot comparison of the hospital ward photo in the misleading posts (L) and the India Today photo with the similarities red circled by AFP (R):

The appearance of the stray dogs at Sadar Hospital was reported by other local news organisations in December 2017, including Indian news outlet News 18 here, Republic World here and the Bihar Post here.

AFP published a fact check report on the same photo in August 2020 debunking the claim that it was taken in July 2020 after Muzaffarpur city saw widespread flooding amid the Covid-19 pandemic.