A photo that shows dogs sitting on hospital beds has been shared thousands of times in multiple posts on Facebook and Twitter alongside a claim it was taken in the Indian city of Muzaffarpur in July 2020 after the city saw widespread flooding and a continuation of the COVID-19 pandemic. The claim is misleading; this photo has circulated since December 2017 in reports about stray dogs in the same Indian city. 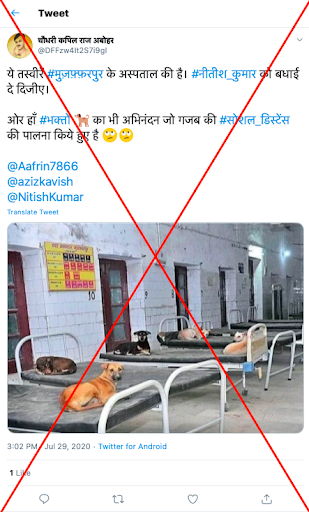 The tweet's Hindi-language caption translates to English as: “This is a photo from a hospital in Muzaffarpur. Congratulations to Nitish Kumar. / And yes, please congratulate these bhaktas who have maintained social distancing.”

Nitish Kumar is the chief minister for India’s Bihar state, where Muzaffarpur city is situated.

“Bhakta” is a Hindu term that means a religious devotee. It is now widely used in India to refer to followers of Indian Prime Minister Narendra Modi and his Bharatiya Janata Party.

A reverse image search on Google found an identical photo published in this December 5, 2017 report by the Indian news portal Oneindia. 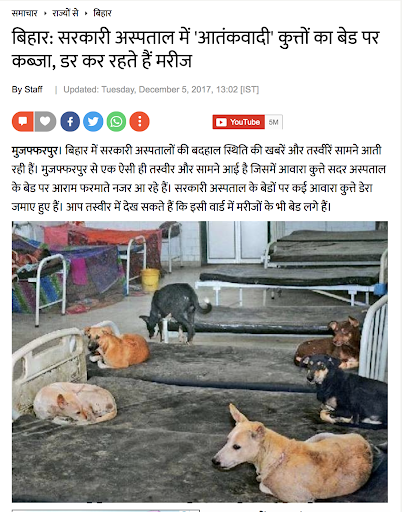 A screenshot of the Oneindia report captured on August 4, 2020

It is headlined: “Bihar: 'Terrorist' dogs occupy beds in government hospital, patients live in fear”. The article reads in part: “Muzaffarpur. There have been reports and photos of the condition of the state hospitals in Bihar. A similar picture has emerged from Muzaffarpur in which stray dogs are seen resting on the beds of Sadar Hospital. Many stray dogs are encamped on the beds of government hospitals. You can see in the picture that beds of patients are also situated in this ward.”

The appearance of the stray dogs at Sadar Hospital was reported by other local news organisations in December 2017, including the Bihar Post news website here and the Dainik Bhaskar newspaper here.

The misleading claim was also debunked by the Indian fact-checking organisation BOOM here.