Skip to main content
Two US Marines stand guard as preparations are made for the inaugural ceremony for President-elect Joe Biden and Vice President-elect Kamala Harris in Washington, DC on January 20, 2021 (AFP / Andrew Caballero-Reynolds)

An article claims that the commandant of the US Marine Corps denied Speaker of the House Nancy Pelosi’s request for troops to provide security for Joe Biden’s inauguration, calling her request “tantamount to treason” and adding “we don’t work for you.” But a Marine Corps spokeswoman called the article “unequivocally false and inaccurate,” and Pelosi’s office said the claim about her is spurious.

“Pelosi contacted Gen. Berger late Monday night, and she beseeched him to commit 5,000 troops to help ensure a peaceful transition of power and to prevent a repeat of the Jan 6 siege of the Capitol...arguing that it was the general’s patriotic duty to quell uprisings and guarantee Biden’s ascension to the Oval Office,” the January 13, 2020 article from “Real Raw News” says.

General David Berger, the head of the Marine Corps, purportedly responded: “Don’t lecture me on patriotism, Madam Speaker. I’ve served this country with distinction for 40 years. I’ve spilled blood for our nation. What have you, a self-serving elected official, done for your country?”

The outlet describes itself as an “independant” (sic) publisher and relied on “a Pentagon source speaking under promise of anonymity” to report the story. 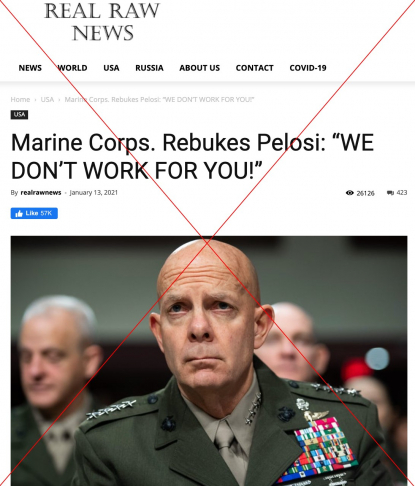 Screenshot of part of an online article, taken on January 19, 2021

The article was shared to more than 200,000 Twitter users, according to social media traffic tool CrowdTangle. Stand-alone claims also spread elsewhere on social media, including this Facebook post with more than 105,000 shares. 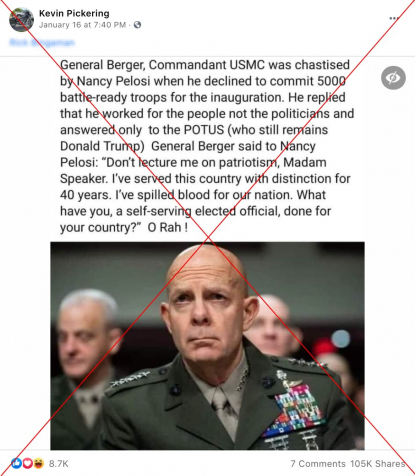 Biden was sworn in as the 46th president of the United States on January 20, replacing Republican Donald Trump.

Following the January 6 riot at the US Capitol building by supporters of Trump and ahead of Biden’s inauguration, most of downtown Washington is blocked off and about 25,000 National Guard troops deployed to the capital.

Captain Casey Littesy, a spokeswoman for the Marine Corps, told AFP in an email that the Real Raw News article “is unequivocally false and inaccurate.”

And Drew Hammill, Pelosi’s deputy chief of staff, said by email that the claims the article made about the speaker are “false.”

Captain Joseph Butterfield, a Marine Corps spokesman, also said in an email: “I can tell you... that the Marines who will be present are serving in a ceremonial role for the inauguration.”

A statement from the US Marine Band announced the group would play for incoming President Biden at the event, as they have for every president since John Adams.

Biden’s inauguration was designated a National Special Security Event (NSSE) by the Department of Homeland Security (DHS), which placed the US Secret Service at the helm and authorized the “full resources of the Federal Government to be brought to bear in the development of event security and incident management plans to ensure the safety of all participants."

The high-security status was extended to the full week leading up to inauguration “in light of events” that occurred at the Capitol and following requests from Congress and Washington’s mayor.