Skip to main content
President Donald Trump meets with US troops for Thanksgiving at Bagram Airfield, Afghanistan, during a surprise visit on November 28, 2019 (AFP / Olivier Douliery)

Video does not show Trump meeting troops in US capital

A video viewed tens of thousands of times on social media claims to show President Donald Trump on a surprise visit to National Guard troops in Washington, where they were deployed  after a January 6, 2021 riot by his supporters. This is false; a reverse image search shows the video is from Afghanistan, where Trump met soldiers in 2019, and there is no evidence that he visited the National Guard in the US capital this year.

“President Trump Surprise Greets the National Guard in the NATIONS CAPITOL,” says a January 18 Facebook post that includes a video and a link to the clip on YouTube. It shows Trump mingling with troops in what appears to be a dining hall strung with orange decorations. 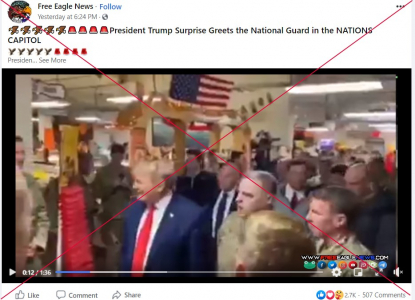 The video has been viewed more than 53,000 times, according to the CrowdTangle social media analysis tool.

“WE DO NOT KNOW IF THIS FOOTAGE IS OF RECENTLY. IT SAYS IT IS...BUT WE ARE SKEPTICAL,” says the Facebook post on the page of Free Eagle News.

It is not, in fact, recent video.

AFP Fact Check broke the video down frame by frame using the InVid WeVerify tool and then performed a Google reverse image search on one of the frames. This led to an article about Trump’s surprise Thanksgiving visit to US troops in Afghanistan on November 28, 2019.

Further searching of images taken during that visit led to a video tweeted by Dan Scavino, social media director at the Trump White House.

Scavino wrote in the tweet on his official White House Twitter account on November 28: “MOMENTS AGO President @realDonaldTrump visits U.S. Soldiers at Bagram Airfield in Afghanistan....”

That video is 1:36 in length, as is the one on YouTube that is linked to in the post. A comparison of frames from the video on YouTube at left, and the Scavino video on the right, shows that they are identical. Examples are shown here: 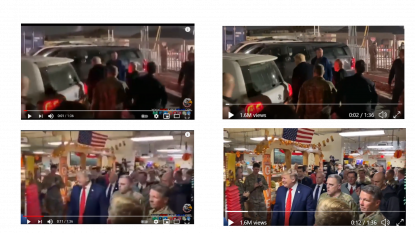 Side-by-side comparison taken January 19, 2021 of the YouTube video, left, and the original posted by Dan Scavino

“I’m unaware of President Trump visiting National Guard members supporting missions in DC in the month of January,” Nahaku McFAdden, of the National Guard Bureau Public Affairs Office, told AFP by email, adding that confirmation should be sought through the White House.

At the time of Trump’s visit with troops at Bagram Airfield, the White House released a transcript of remarks he made to them.

But a search of the White House website for “National Guard” reveals no mention of a January visit by Trump to troops in Washington. The last reference to the National Guard was in memorandums issued on December 3, 2020 for funding their deployments supporting efforts against Covid-19.

An online search for “Trump and visit and ‘National Guard’” also indicates nothing about a recent visit by him to troops in the capital.

A similar search for Vice President Mike Pence, however, confirms that he met them on January 14, 2021.

They are among at least 25,000 Guard troops who have poured into the capital for the January 20 inauguration of Joe Biden after local authorities called for help on January 6 when pro-Trump rioters overwhelmed police at the Capitol.

A session of Congress was meeting to certify Joe Biden’s victory in the 2020 election when Trump supporters stormed the complex.

The unrest led to the deaths of five people, and the Democrat-controlled House of Representatives impeached Trump on January 13 with support from 10 Republicans on a charge of “incitement of insurrection.”