US border authorities apprehended many more than 9,000 people in 2020

Facebook posts shared thousands of times claim only 9,000 migrants illegally passed through the United States border in 2020 during the administration of former president Donald Trump, while more than 100,000 have entered the country unlawfully under President Joe Biden in 2021. This is false; US Customs and Border Protection recorded more 2020 apprehensions than stated, and less in 2021. 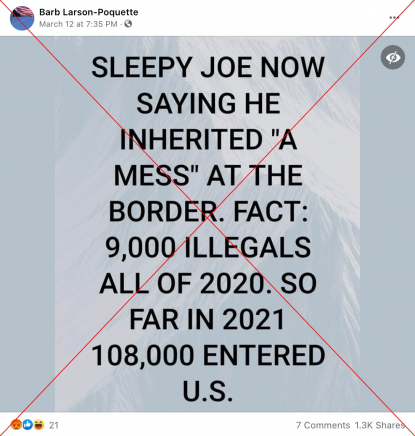 More examples of the claim are available on Facebook here, here and here.

US Customs and Border Protection (CBP), a Department of Homeland Security (DHS) law enforcement agency, records data for fiscal years, not calendar years, but reported about 43,000 Border Patrol apprehensions between March and September of 2020.

Apprehensions are defined on the CBP website as “the physical control or temporary detainment of a person who is not lawfully in the US which may or may not result in an arrest,” and the agency reported 42,547 on the southwest border and 404 on the northern border March through September 2020. 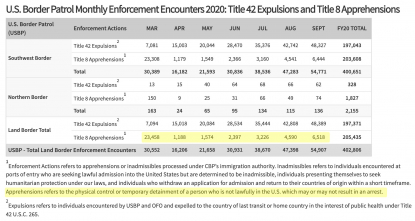 Screenshot of a US Customs and Border Protection (CBP) chart detailing 2020 statistics, taken on March 17, 2021 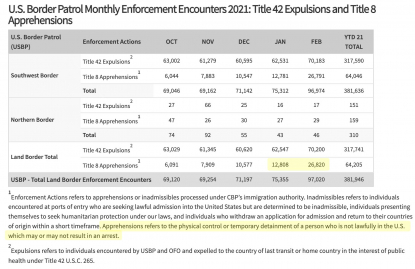 Screenshot of a US Customs and Border Protection (CBP) chart detailing 2021 statistics, taken on March 16, 2021

Michelle Mittelstadt, communications director at immigration think tank the Migration Policy Institute, told AFP in an email: “The 9,000 claim for 2020 is inaccurate.”

She added: “While Covid-19 was responsible for a sharp reduction in mobility worldwide during 2020, including migration to the US-Mexico border, the Border Patrol encountered far more than 9,000 individuals. The encounters at the border seen so far this fiscal year represent a reversion to the pattern seen during similar months in fiscal 2019, albeit at a slightly higher rate.”

Jeff Passel, an immigration expert at the Pew Research Center, said in an email that “we don’t have data on how many unauthorized immigrants ‘crossed’ the border. What DHS provides is data on ‘encounters.’”

The Facebook posts also claim that Biden said he inherited “a mess” at the border.

The quote seems to more closely echo Democratic Senator Chuck Schumer when he said on ABC’s "The View", “Biden inherited a huge mess on immigration.”

Biden himself said something similar, but he was referring to the Trump administration's Covid-19 response. “We’re making progress from the mess we inherited,” the president said on March 2.

Trump insulted Mexican migrants the day he announced in 2016 he was running for president, and vowed to build a wall across the southern US border.

Biden has since hit pause on border wall construction and sent a bill to Congress to revamp immigration policies and give millions of undocumented migrants living in the country a path to citizenship.

His pledge of a more humane approach has helped spark a new rush to the border -- and is threatening to become a huge political liability at home. On March 16 during an interview  with ABC News, he told migrants bluntly. "Don't come over... Don't leave your town or city or community."

All articles
MIGRATION US POLITICS